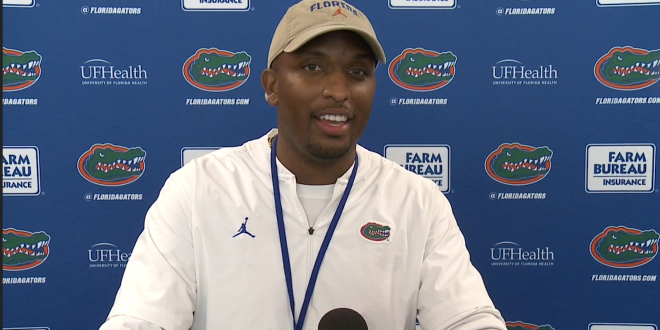 Brian Johnson’s Debut as Florida’s OC a Successful One

To say, Brian Johnson had a successful debut as the Gator’s quarterback coach in week one would be an understatement.

Johnson recently made history with the Gators after being promoted by coach Dan Mullen to offensive coach last week. He is the first African-American man to hold this position.

Coach Johnson has quite the talent to work with, in his first season as the offensive coach and believes his team will only improve as the season progresses.

The Gators came out strong in week one beating Ole Miss 51-35 in Oxford last weekend. Gator quarterback Kyle Trask had an outstanding start to the season throwing for 416 yards and 6 touchdowns.

Johnson says that Trask does a great job distributing the ball and that his choice in distribution depends on one thing.

And Kyle Pitts, undoubtedly the best tight end in the game of college football, also took over in game one. Pitts ended the day with 170 receiving yards, 8 receptions, and 4 touchdowns.

Pitts is almost unstoppable. There were several moments in the game the tight end had more than one person on him, and he still managed to score.

Although the Gators came out with a big win against the Rebels, coach Johnson says there is still room for improvement in key areas of the offense.

Johnson says the biggest thing the Gators are working on during practice is taking better care of the ball. In game one, there were two instances where Florida lost the ball. The Gators threw one interception, and they had a strip-sack in the pocket where they lost the ball but ended up recovering it.

Johnson says things of that nature need to be cleaned up before taking on their next opponent, and they must finish drives.

Luckily, Gator kicker Evan Mcpherson was able to still score on these drives and rack up some points for Florida. Mcpherson is perfect on the season so far scoring 15 points for the Gators in game one.

Gators next Contest at Home

Next, the Gators host the South Carolina Gamecocks this Saturday. The Gamecocks are coming into this game after losing in week one to Tennessee losing 31-27.

The Gamecocks have only won in the Swamp a total of two times since they joined the SEC back in 1992. Last time Florida and South Carolina met, Florida came out with the win 38-27.

Saturday’s kick-off is set for noon in the Swamp.