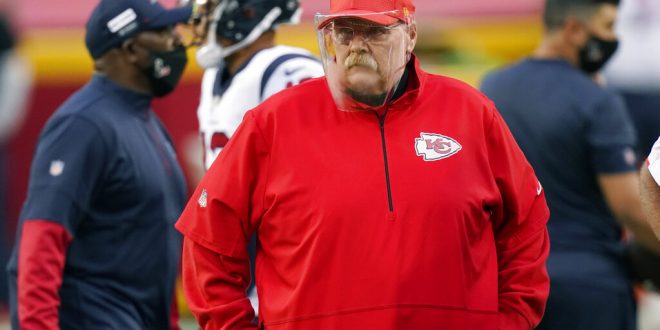 FILE - In this Sept. 10, 2020 file photo, Kansas City Chiefs head coach Andy Reid watches as players warm up before an NFL football game against the Houston Texans in Kansas City, Mo. Buffalo Bills coach Sean McDermott pays credit to experiences and advice he gained working under Reid, while the two were in Philadelphia, including getting fired by Reid in 2010, which McDermott says was the best thing to happen to his career. (AP Photo/Charlie Riedel, File)

The Buffalo Bills take on the Kansas City Chiefs in the first of two Week 6 Monday football matchups.

A COVID-19 outbreak across the Tennessee Titans forced the game to move from its originally scheduled date of Oct. 15. The Bills played the Titans in Week 5, and as a result both their Week 5 and Week 6 games shifted, per ESPN.

The change to a Monday night matchup is significant, as the Bills haven’t had much success on Mondays.

They’ve only played on Monday four times in the last ten years, according to the ESPN article, and their last Monday night outing was a 25-6 loss to the New England Patriots. You have to go back six years to find the last time the team won on the first weekday: they topped the Jets 38-3 in 2014.

Bills-Chiefs: Breaking It Down

The Bills are (4-1) on the season after a Week 5 loss to the Tennessee Titans. Prior to the defeat, the team finished 6.75 points ahead of their opponents each game. Though the games were close, they always pulled the win out in the end. What changed against Tennessee?

Perhaps the scheduling changes played a role, but the Bills’ increase in penalties certainly did them no favors. Titans Wire reported that the Bills recorded 10 penalties for 56 yards, three of which allowed the Titans to extend their drive.

The Bills were also outscored 14-0 in the fourth quarter. If they hope to get a win tonight, they’ll need to put points on the board consistently.

The Chiefs enter the game at (4-1) after they too suffered a Week 5 loss.

Before falling to the Las Vegas Raiders, they averaged a slightly higher margin of victory than the Bills, beating opponents by 8.75 points per game.

Head coach Andy Reid expects his team to respond well to the defeat.

Additionally, quarterback Patrick Mahomes’ season is off to a stellar start. He’s thrown for 1,474 yards and 13 touchdowns through five games. ESPN gives him a QBR of 86.2, which ranks first in the league.

The game will kickoff at 5 p.m. eastern on FOX.