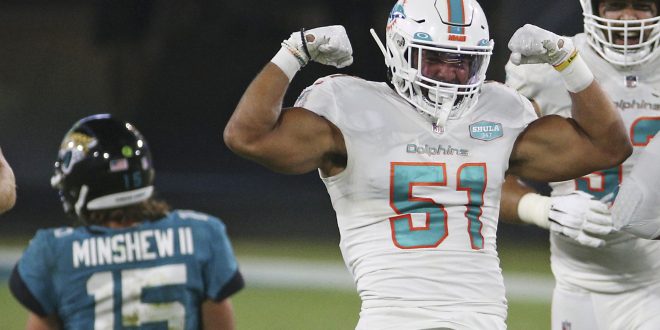 The Jaguars have now lost their fifth straight game after winning the season opener over the Colts. Meanwhile, the Miami Dolphins have won two straight after shutting out the Jets on Sunday 24-0.

The Jaguars have struggled on both sides of the ball during this losing streak. The Jaguars’ offense only topped 30 points once in the last five games, and the defense has given up 30 in each of those five games.

Head coach Doug Marrone spoke about the offensive woes for the Jags, and how frustrated he is with the current results.

Quarterback Gardner Minshew II also talked about what is will take for the Jaguars to get back to winning.

Jacksonville is currently (1-5) and will look to right the ship in Los Angeles against Justin Herbert and the Chargers next Sunday afternoon.

For the second straight week, the Miami Dolphins won in blowout fashion. Last week it was the 49ers 43-17, and this week they shutout the Jets 24-0. It’s the Dolphins first shutout win since 2014.

Ryan Fitzpatrick threw for three touchdowns in the first half to help put the game away by halftime.

With the game all but over, the Dolphins finally let the fifth overall draft pick from this year’s draft Tua Tagovailoa make his debt. It was a brief five play drive, but Tagovailoa was two for two and handed the ball off three times before the clock ran out.

After the game, Tagovailoa was the last man off the field. He said he sat down at the 15 yard-line to FaceTime is parents.

They say a picture is worth a thousand words. This one is worth 11 months of blood, sweat and tears. Kudos @tua. All praise to God. pic.twitter.com/EOOHChLhdX

Tagovailoa talked about his moment on the field after the game.

The Dolphins are currently 3-3 heading into their bye week this week. The Dolphins will have two weeks to prepare for a home matchup against the Rams on Nov. 1.