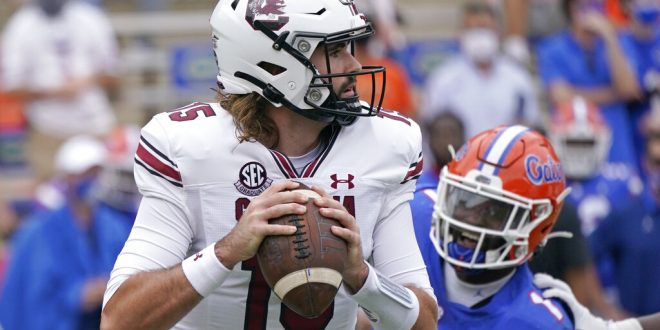 South Carolina quarterback Collin Hill, left, looks for a receiver as he is pressured by Florida linebacker Brenton Cox Jr. (1) during the first half of an NCAA college football game, Saturday, Oct. 3, 2020, in Gainesville, Fla. (AP Photo/John Raoux, Pool)

This weekend in the SEC, the South Carolina Gamecocks (2-2) take on the LSU Tigers (1-2). The game will take place in Baton Rouge On Saturday, starting at 7 pm.

South Carolina has not defeated LSU since 1994. They are 0-6-1 since then. But this could be the best opportunity for South Carolina to steal a win on the road. The Tigers starting quarterback Myles Brennan is out with an injury and will be replaced by a mix of freshman quarterbacks.

What to Expect from South Carolina

The Gamecocks are hoping to slay two tigers in back-to-back weeks. The Gamecocks are coming off an upset win at home over Auburn 30-22. They held the Tigers to two field goals in the second half.

This defensive elevation was aided by cornerback Jaycee Horn. Horn is the son of the former NFL wide receiver Joe Horn. In Jaycee’s best game of his career, he picked off Bo Nix twice and deflected a pass that led to an interception. He also held Seth Williams to two catches on ten targets. This could very well have been Horns coming out party. Head Coach Will Muschamp said Horn wants to guard the best receiver and has great ball skills and instincts.

Muschamp said, “It’s hard to coach a guy to be competitive.”

But with Horn, this competitive nature comes from within, and Muschamp thinks highly of him for that. Horn will be tasked with guarding LSU stud receiver Terrance Marshall Jr., who has 421 yards and seven touchdowns in three games on the season.

There has been an elevation on the other side of the ball for the Gamecocks as well. Jalen Brooks, a 6-foot-3 wide receiver transfer from Wingate was granted eligibility by the NCAA this week. Muschamp says he “is one of the faster guys on our team,” and he’s very bright being able to play multiple positions. This could be tempting for offensive coordinator Mike Bobo to throw the ball more, even though their run game has been impressive. This addition could bring the offense to new heights.

What to Expect from LSU

The defending national champions are coming off a road loss to Missouri 41-45. The defense was once again gashed for 586 yards. Head Coach Ed Orgeron prides himself on defense and does not want this to become a trend where his team is in an offensive shootout. Ironically, the Bayou Bengals forced two fumbles on defense and the offense did not turn the ball over. Expect that to change this week.

As I mentioned earlier, the Tigers will be without starting quarterback Myles Brennan. This will be a huge loss for LSU because of how well Brennan has been playing. To keep USC on their toes, Orgeron said that the backup quarterbacks TJ Finley and Max Johnson “both can do well, but you never know until you play them.” This will make it hard for the Gamecocks to scout. Although, both quarterbacks have similar builds and play styles. The team might have to look to its committee of running backs to move the ball.

LSU is favored but if the Tigers want to win, they will need to make some stops and hope that the offense moves as well without Brennan. South Carolina could make it very interesting with a resurgence on defense and the new addition on offense. Should be a competitive game with an electric atmosphere.