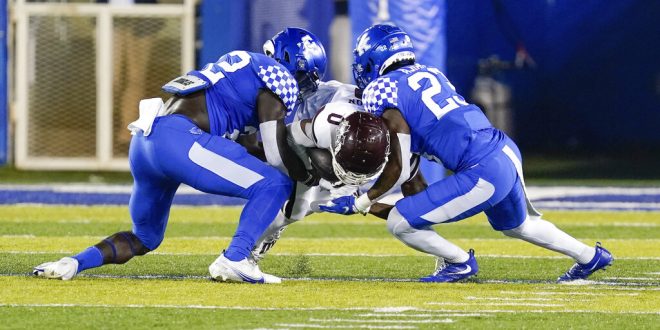 Kentucky Goes Up Against Missouri in Week 5 SEC Football Action

After a convincing victory over the then 18th-ranked Tennessee Volunteers last week, the Kentucky Wildcats (2-2, 2-2) look for their third-straight win when they take on the Missouri Tigers (1-2, 1-2) on Saturday.

It was a rough start to the season for Kentucky. The Wildcats dropped their first game of the season to the Auburn Tigers, 29-13.

The following week, Kentucky lost an overtime heartbreaker to the Ole Miss Rebels, 42-41, in its home opener. But in Week 3, the Wildcats were able to finally find some momentum after a dominating, 24-2, victory over the Mississippi State Bulldogs.

Kentucky carried that energy into its contest last week against the ‘Vols. The Wildcats controlled the game from start to finish against Tennessee and were able to get their first win in Knoxville in over 30 years.

Quarterback Terry Wilson completed 12 of his 15 passes on the day for 101 yards and a touchdown. Additionally, Kentucky also got a big game from its defense.

The Wildcats’ defense picked off ‘Vols’ quarterback Jarret Guarantano twice, with both being returned for touchdowns. Furthermore, Kentucky also racked up five tackles for loss and two sacks.

Last week is now behind the Wildcats. And all the attention is now on a Missouri team that hasn’t played in two weeks due to COVID-19 scheduling issues in the SEC.

Head coach Mark Stoops said he was happy with how his team played last week against Tennessee and the poise they showed on the road. But Kentucky must have that same mentality this week against the Tigers.

The defense has been the story the last few weeks for the Wildcats. And Stoops said since the Ole Miss game, he has been pleased with the improvement on this side of the ball and the corrections coordinator Brad White has made.

The defense has seen some refinement. But Missouri will look to put some points up on Saturday.

As previously mentioned, Missouri hasn’t seen live game action since an Oct. 10 victory over the defending champion LSU Tigers. The Tigers were supposed to play the Florida Gators this weekend, but the Gators’ recent coronavirus outbreak forced the game to be pushed back to next week.

Now, Missouri instead has a home game against the Wildcats. The Tigers got a huge performance from freshman quarterback Connor Bazelak against LSU, as he completed 29 of his 34 passes, threw for 406 yards and four touchdowns.

Furthermore, the ground game was also clicking, as senior running back Larry Rountree III ran the ball 18 times for 119 yards. Head coach Eliah Drinkwitz is looking forward to playing Kentucky and said it will be a challenge for his squad.

Drinkwitz said the unscheduled off week was a bit of a “surprise.” But it allowed the team to focus on areas that needed attention.

Missouri is back to playing live game football again. After a week off, it will be interesting to see how the Tigers come out against the Wildcats. We’ll find out what happens when the two teams meet at 4 p.m. on Saturday.