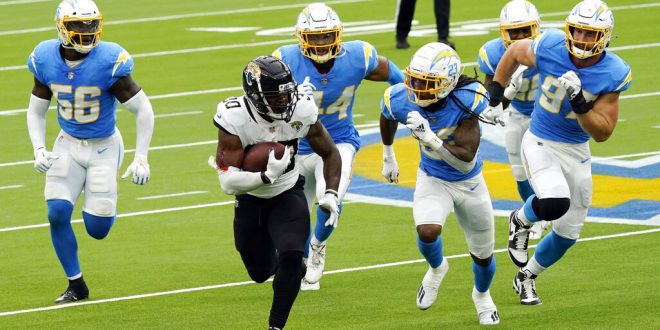 Jacksonville Jaguars running back James Robinson runs against the Los Angeles Chargers during the first half of an NFL football game Sunday, Oct. 25, 2020, in Inglewood, Calif. (AP Photo/Alex Gallardo)

The Jacksonville Jaguars entered the SoFi Stadium in search of a win, but the Los Angeles Chargers had other plans. The Jaguars fell to the Chargers 29-39, as Jacksonville was handed its sixth loss of the season.

The Chargers took control of the game early in the first quarter. Chargers quarterback Justin Herbert exposed Jacksonville’s lackluster defense in the air and on the ground. Herbert led all Chargers rushers with 66 yards on nine carries.

Kicker Michael Badgley put the Chargers up 3-0 with a 35-yard field goal.

Joe Reed found the end zone to close out the first quarter with a seven-yard run. Badgley was not able to secure the extra point as the Chargers led 9-0.

The second quarter started with the Chargers extending their lead. Herbert connected with tight end Donald Parham Jr. for a 22-yard passing touchdown.

Gardner Minshew II responded by feeding the ball to rookie running back James Robinson for the Jaguars’ first touchdown.

The Jaguars’ offense ignited with 14 unanswered points. The second quarter ended in a close match with Chargers being up 16-14.

The Jaguars’ defense made an impressionable play to the start the second half. Safety Daniel Thomas managed to block a punt to return the ball for a touchdown, giving the Jaguars a 21-16 lead.

A few drives later, Herbert and company responded. The rookie launched the ball 26 yards into the end zone to Virgil Green for a touchdown, regaining the Chargers lead.

On the following drive, Minshew II connected with Chris Conley in the end zone for a much needed touchdown. The Jaguars took back a 29-22 lead.

The Chargers responded with two touchdowns of their own to silence the Jaguars. Heading into the fourth quarter the Chargers took control leading 36-29.

The game ended with the Chargers winning it at home against the Jaguars 39-29.

Up Next for the Jaguars

Jacksonville looks to refocus in a much needed bye week. On Nov. 8, Jacksonville welcomes Deshaun Watson and the (1-6) Houston Texans to TIAA Bank Field.