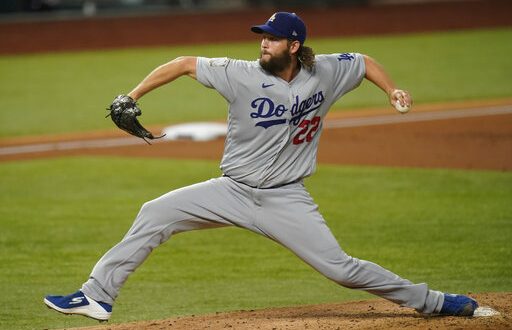 The Los Angeles Dodgers scored three runs in the first two innings to set up the 4-2 Game 5 win over the Tampa Bay Rays. The Dodgers have a 3-2 series lead, and can win the World Series Tuesday night.

The Dodgers’ Clayton Kershaw pitched well for the second time this series. Kershaw went 5.2 innings with two earned runs and six strikeouts. During the game Sunday night, Kershaw recorded his 206th strikeout. He now has the most strikeouts in MLB postseason history.

With his 206th strikeout, @ClaytonKersh22 now has the most strikeouts in #postseason history. pic.twitter.com/2P9VHGukAb

Kershaw talked about his accomplishment and what it meant to him after the game.

The Rays had their chances in Game 5. The Rays were down 3-0 going into the bottom of the third. Yandy Diaz got the scoring started for the Rays with an RBI triple that scored Kevin Kiermaier. Next, Randy Arozarena came up and singled to score Diaz.

Probably the best chances for the Rays came in the bottom of the fourth. Manuel Margot lead off the inning with a walk. Then, he stole second, and reached third via error. Hunter Renfroe followed that with a walk of his own so the Rays had runners on first and third with no one out.

From there, the Rays popped up and struck out with no advancement of the runners. Finally, to end the inning Margot was caught stealing at home.

Dodgers look to take the series

Los Angeles can clinch the World Series title in Game 6 Tuesday night. Tony Gonsolin takes the mound for the Dodgers, and Blake Snell will start for the Rays.

Kershaw spoke about how tough it will be for the Dodgers sitting on a 3-2 series lead heading into an off-day.