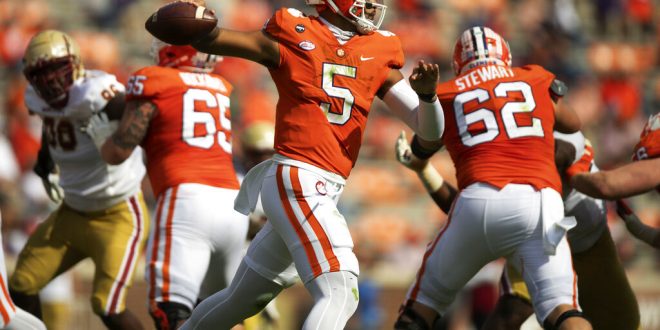 Clemson quarterback D.J. Uiagalelei (5) passes the ball during the first half of an NCAA college football game against Clemson Saturday, Oct. 31, 2020, in Clemson, S.C. (Josh Morgan/Pool Photo via AP)

The top-ranked Clemson Tigers travel to South Bend to take on the No.4 Notre Dame Fighting Irish on Saturday.

The Tigers enter their toughest matchup of the season at 7-0. The Fighting Irish enter the game undefeated, at 6-0. Notre Dame entered the ACC for the 2020 season because of the COVID-19 pandemic. Furthermore, five of Notre Dame’s wins are in conference.

Clemson will be without arguably one of the best quarterbacks in the country on Saturday. On Oct. 29, Trevor Lawrence announced over Twitter that he had tested positive for COVID-19. In addition, Lawrence would miss the team’s next game against Boston College. Shortly after, it was also announced he would miss the matchup against the Fighting Irish.

Clemson head coach Dabo Swinney said Lawrence was in good spirits and would be cleared to travel with the team.

Clemson struggled without its Heisman candidate against Boston College. The team trailed early and won because of a second-half surge behind backup quarterback D.J. Uiagalelei and running back Travis Etienne. In addition, Swinney stated how the Eagles made the game a passing game, which made the game close.

Swinney said the Fighting Irish are going to be a “different animal” this week. Furthermore, Swinney stated Notre Dame has elite talent and plays with elite effort.

Notre Dame quarterback Ian Book leads his team into a rare matchup against the number one team. Additionally, the Fighting Irish can improve their chances to make the College Football Playoff with a win Saturday.

Steven Walker is a beat writer for ESPN Gainesville and is currently studying Journalism & Sports Media at the University of Florida.
@swalker_7
Previous Auburn on bye after big win over LSU
Next Missouri Tigers On Bye Week