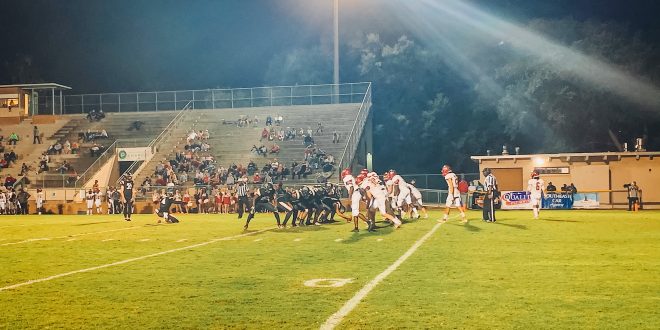 The Buchholz Bobcats line up to kick the extra point. Photo by Hannah White

The Bobcats started the night off by scoring their first touchdown in under 2 minutes. Quarterback Creed Whittemore threw a deep pass to his trusty running back Quandarius Smith for the touchdown.

With several incomplete passes by Whittemore in the first half, he relied on Smith and wide receiver Terrell Jackson to run the ball. Smith spent most of his time running down the middle after the pass off, gaining yardage but rarely resulting in a first down.

Before the half, wide receiver Jacarree Kelly ran the punt return all the way to the end zone. This gave the Bobcats a 43-0 lead as they headed into the locker room.

The offense was very efficient in the red zone, only missing their chance to score twice. First, a blocked field goal attempt, then late in the game after the first string was taken out. Coach Mark Whittemore wanted to play this game clean and smart. He kept players on the field just long enough as they prepare for their first playoff matchup next week.

Buchholz’s defense was just as strong as their offense, restricting Santa Fe from gaining much yardage. This kept the Raiders from making it to the red zone, and Buchholz only allowed them past the 50-yard line once.

The defense kept a lot of pressure on the Raiders quarterback, forcing him to throw incomplete passes and handoff to guys who weren’t prepared. The Bobcats impressed the masked crowd with several sacks, giving the team the momentum they needed to finish out the season.

At the end of the first half, Buchholz held the Raiders punt return at the 6-yard line. Defensive end Matt Clayton sacked the quarterback in the end zone, resulting in a loss of yards. After a false start and another attempt by Santa Fe to get out of their own endzone, the play resulted in a safety, giving the Bobcats an extra two points.

Immediately after, safety Damien Curtis intercepted a Raider ball, nearly resulting in a pick six. A flag on Buchholz for an illegal block in the back brought the ball back to the spot of interception where the Bobcat offense took over.

This game saw a lot of penalties on both sides. In the first 6 minutes, Santa Fe had four penalties, three of which were on the defense.

Both offenses served holding and false start penalties, and both defenses were prone to encroachment. Several facemasks by the Buchholz offense gave the Raiders many of their first downs.

The matchup will be next Friday, November 13th at 7:30 pm, location TBA.