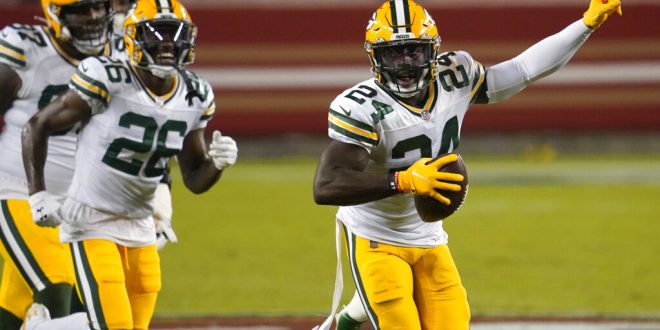 The Green Bay Packers improved to 6-2 on the season after topping the 49ers 34-17. The Packers jumped out to a 21-3 lead at the half and never let up. Green Bay has solidified sole possession of the top spot in the NFC North.

Green Bay quarterback Aaron Rodgers led the way for his squad as he efficiently completed 25-of-31 passes for 305 yards. Rodgers four touchdowns and 147.2 passer rating helped the Packers cruised to a big win.

Packer’s wide receiver Davante Adams had another huge game with 10 catches for 173 yards and a touchdown. He made his case on how he’s the best wide receiver in the league and how it’s only up from here.

“It’s just about emptying that tank man. I mean I got a lot to give, I’m relied on a lot in this offense. I’ve got a very talented quarterback. I’m just in the business of maximizing stuff , I think you guys know that based off of my whole mantra and mentality of how I attack every day,” Adams said.

The packers are scheduled to play their next game this Sunday as they host the Jacksonville Jaguars. Kickoff will start at 1 p.m. and air on Fox.

The 49ers look to bounce back during their next game Sunday versus the Saints. Kickoff is set for 4:25 p.m. and will air on Fox.