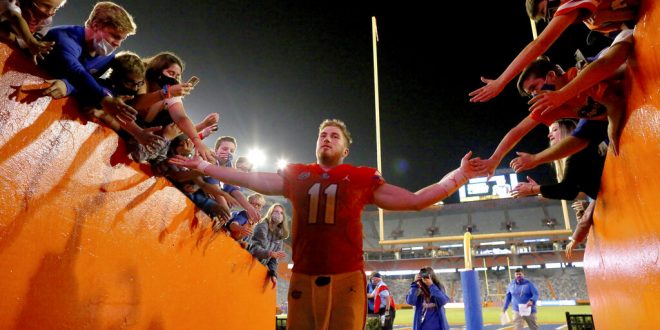 Florida quarterback Kyle Trask (11) is congratulated by fans as he leaves the field after the team's win over Arkansas in an NCAA college football game in Gainesville, Fla., Saturday, Nov. 14, 2020. (Brad McClenny/The Gainesville Sun via AP)

In 2019, Florida quarterback Kyle Trask started his first game since the eighth grade. In 2020, through six games Trask leads the SEC in passing yards and touchdowns, keeping pace with Joe Burrow’s magical season from a year ago. Trask’s astronomical rise is straight out of the storybooks.

Infamously, Trask sat behind Miami Quarterback  D’Eriq King all four years at Manvel High School. Only Lamar University and McNeese State had offered the 6’4 pro-style QB. That is until one day, while Florida OC Doug Nussimier was scouting defensive backs, he noticed the back-up quarterback.

And the rest is history.

Kyle Trask is putting together one of the single greatest seasons in Florida Gators Football history. Trask is on pace to shatter Rex Grossman’s single-season passing yards record of 3,896 with 2,171 yards in the air.

However, Trask looks to keep the focus on what’s now vs. what’s next, with a road matchup against Vanderbilt Saturday. Trask spoke with the media Monday to discuss the upcoming matchup.

Saturday, Trask exploded against SEC West foe Arkansas. The redshirt senior tossed for 356 yards in the air with 6 touchdown strikes, completing an outlandish 79.3% of his passes.

As such, Trask becomes the first FBS player since 2016 to throw for four touchdowns in six straight games, garnering SEC Offensive Player of the Week for the second week in a row. It was much of the same for Trask, who has averaged 361.8 yards per game in the air this season.

Yet the cinderella story from Manvel, Texas, showed the world why he’s a Heisman favorite once again Saturday. With 7:28 left in the second quarter, Trask put a 21-yard TD right in the hands of Justin Shorter to extend the Gators lead to 21-7.

Throws such as this are reflective of the season Trask is having. The touch and accuracy he puts on the ball are what makes him special, as evident with this strike to Shorter. Trask dished out NFL throws all game long, as the redshirt senior is soaring up draft boards. Trask discussed the 63-35 win against Arkansas Monday.

This pass and catch from Kyle Trask and Justin Shorter was phenomenal pic.twitter.com/MO5tGU5OhL

During the offseason strength and conditioning program, Coach Nick Savage has a saying: “Don’t Let Go Of the Rope”. This is the motto for the rest of the Gators football season.

Florida has four games remaining on their schedule, and if they win out they will be set up for a death match against Alabama in the SEC Championship. While Florida has a 94.8% chance to win the SEC East according to the ESPN Football Power Index, no game can be taken too lightly.

Trask understands the task at hand and looks to take it one game at a time. Trask told the media about his focus Monday.

Now, none of Florida’s current position would be possible without the play of Trask. Trask’s play elevates those around him. During the shutdown of spring camp, Trask returned to Manvel where he trained beside an old friend: Miami QB D’Eriq King.

From a year ago, Trask looks more comfortable running the Florida offense, making throws into tighter windows and taking more chances. With that being said, Trask is doing it all without the overwhelming favorite for the Mackey Award Kyle Pitts. With Pitts returning, Florida’s offense should only improve, which is a scary sight for once-proud SEC defenses. Trask discussed his improvement from a year ago Monday.

The Florida Gators have four remaining games on their schedule: Kentucky, Tennessee, LSU and Vanderbilt this Saturday. If the Gators win out, they will play for a shot at their first SEC Championship since 2008 and their first-ever College Football Playoff berth.

Sam Petosa is a Journalism major pursuing a Specialization in Sports and Media at UF. The South Florida native produces daily shows for WRUF, including "Sport Scene with Steve Russell, and "The Tailgate." In addition, Sam provides weekly sports updates for WUFT News and radio Sportscenter's for WRUF radio. Sam has been a writer at ESPN Gainesville since January 2020.
@sampetosa5
Previous NBA Rocked by Big Trades
Next LSU Mishandles Sexual Misconduct: Orgeron Says He Took Appropriate Action