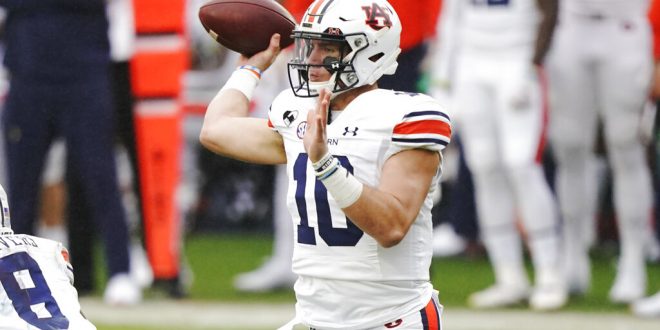 The 2-4 Tennessee Volunteers will travel to Auburn Saturday to face the 23rd ranked 4-2 Tigers at 7 p.m. Tennessee currently holds fifth place in the SEC East, while Auburn sits in third place in the SEC West. In seven contests between the two teams since the turn of the century, Tennessee has prevailed only once.

Auburn hasn’t played a game since Halloween when they soundly defeated LSU at home by 37 points. Originally, Auburn was scheduled to play an away game against Mississippi State last Saturday. However, it was postponed to Dec. 12 after Mississippi State faced a COVID-19 outbreak within its program.

In his most recent start versus LSU, Auburn quarterback Bo Nix played his best game of the year statistically. Nix completed 75% of his passes and reached the 300-yard passing mark for the first time this season. The sophomore even rushed for a season-high 81 yards while racking up four total touchdowns.

It was Auburn’s first game this season in which Nix hasn’t been sacked. This will be especially critical for Auburn’s offensive line to perpetuate as they try to contain Tennessee edge-rusher Deandre Johnson, who shares the lead for sacks in the SEC. Auburn head coach Gus Malzahn commented on the recent production out of his offensive line, attributing its success to everyone coming together and settling in. “We played musical chairs there during fall camp and the first couple games because of different issues, either injuries or COVID,” Malzahn said.

Aside from Nix’s mobility, freshman running back Tank Bigsby adds a whole new dimension to Auburn’s rush attack. In his last four games, Bigsby has rushed for over 450 yards while finding the end zone five times. That being said, he may struggle to find running space against a Tennessee defense that has yet to allow a single 100-yard rusher this season. To make matters worse for Bigsby, Tennesee linebacker Henry To’o To’o, who shares the SEC lead in tackles for loss.

Coming off a bye week, the Volunteers should be almost as well-rested as Auburn. “It seems like it’s been forever since we’ve played,” Tennessee head coach Jeremy Pruitt admitted. Nonetheless, the team is “very excited to get an opportunity to play again,” Pruitt said.

Tennessee enters the matchup on a four-game losing streak in which they were outscored by nearly 100 points. Offensively, Tennessee has struggled this year, particularly through the air. The Volunteers are one of only two SEC teams currently averaging under 200 passing yards per game. Just two years ago, however, senior quarterback Jarrett Guarantano led Tennessee to a road victory over Auburn when he threw for 328 yards and two touchdowns.

In spite of that, Guarantano enters Saturday’s game listed as questionable after suffering a head injury on Nov. 7 versus Arkansas. When asked which quarterback will start, Pruitt said, “I’m going to wait and let that show itself on Saturday.” “I don’t think it does us an advantage to tell Auburn who we’re going to play at quarterback,” Pruitt noted.

After Saturday’s game, Auburn will prepare for a road game versus No. 1 Alabama before returning home to play No. 5 Texas A&M the following weekend. As for Tennessee, the Volunteers have a difficult schedule down the stretch. After traveling to Nashville to take on in-state foe Vanderbilt, Tennessee will face No. 6 Florida and No. 5 Texas A&M to close the season.

Hi, my name is Griffin Foll and I am currently a senior at UF studying sports media journalism with a concentration in political science. I contribute weekly web and radio content for WRUF ESPN Gainesville and help cover the World Cup/Champions League soccer beat. Be sure to check out some of my recent articles!
Previous LSU Looks to Get Season Back on Track This Week Against Arkansas
Next Mississippi State and Georgia Meet Coming off Unplanned BYE Weeks