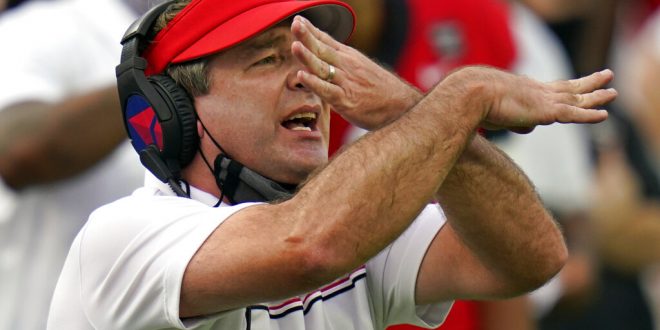 Georgia head coach Kirby Smart signals to his players during the first half of an NCAA college football game against Florida, Saturday, Nov. 7, 2020, in Jacksonville, Fla. (AP Photo/John Raoux)

After week 1 of the SEC slate saw Mississippi State upset the defending national champion LSU Tigers and the Georgia Bulldogs roll through Arkansas, it seemed like this mid-season matchup could be a marquee matchup.

Instead, it’s eight weeks later, and it’s safe to say both teams haven’t been having the seasons they had hoped for. Georgia comes in with two losses, one of them to their rivaled Gators. And Mike Leach’s Bulldogs limp into this matchup losing four of their last five games. (The lone exception being a 7-point win over winless Vanderbilt)

Even still, both teams will look to get back on track after COVID-19 put their week 11 games on hold. For Georgia, a win would keep them on track for a potential New Year’s Six bowl. For Mississippi State, a win would snap them out of a rut and give Leach a signature victory.

It’s no secret that the quarterback position has been a struggle for Smart’s Bulldogs this season. Both Stetson Bennett and D’wan Mathis saw the field against the Gators, but both were underwhelming, to say the least.

However, there’s a real chance that neither quarterback gets the start on Saturday. Several reports claim that USC transfer J.T. Daniels will get his long-awaited chance to lead the offense in the red and black.

USC transfer JT Daniels will start at QB for Georgia on Saturday, according to reports.https://t.co/7KGYoALyci pic.twitter.com/JIvdnw0ypI

Several Georgia fans called for Coach Smart to put in Daniels when it became clear the Gators would win. Instead, Daniels will get his first shot against a Mississippi State defense that is giving up 359.8 yards per game. Smart spoke on J.T.’s potential in the SEC coaches’ weekly teleconference on Wednesday.

As a true freshman for the Trojans, Daniels threw for 2,672 yards, 14 touchdowns and 10 interceptions.

Mississippi State is facing a similar dilemma. Starting quarterback K.J. Costello went down with an injury after a hard hit on a scramble against Alabama. Will Rogers started in his place against Vanderbilt and was able to break the Bulldogs 4-game losing streak.

Leach has yet to confirm who will get the start. Regardless of who plays, though, they’ll have their hands full with an impressive Georgia defense.

Despite allowing 44 points to the Gators in Jacksonville, the Bulldogs still have the best scoring defense in the SEC, allowing 20.8 points per game. Kyle Trask and company, though, exposed a weakness in that unit in the secondary. The Gators put up 474 passing yards against the Dawgs and Alabama put up 417. The unit’s struggles against Florida could be chalked up to injuries, but it remains to be seen if this secondary can step up in a big game.

The big storyline entering this game is certainly J.T. Daniels getting his shot for the Bulldogs. But other matchups should be fascinating to watch. At the end of the day, it’s the air raid offense of Mike Leach against the defensive mastermind of Kirby Smart. Kickoff is set for 7:30 p.m. on Saturday on the SEC Network.

I'm a third-year student at the University of Florida passionate about storytelling and sportswriting. My goal is to work in communications for a professional sports team after I graduate.
Previous Auburn Looks to Remain Undefeated at Home after Three-Week Hiatus
Next Alabama Set to Take on Kentucky