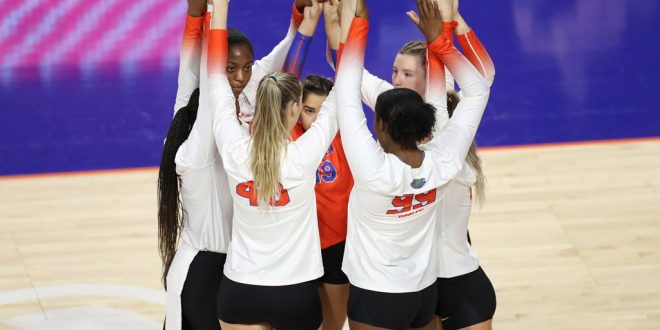 Scenes from the Gators' 3-0 win against the Crimson Tide on October 30, 2020. Photo By: Courtney Culbreath

The Florida Gator volleyball team ended its 2020 fall season on a high note  as the fifth ranked Gators defeated the Georgia Bulldogs in four sets on Saturday.

Florida finished the fall schedule with a 6-2 record, tied for second in the SEC with Arkansas and Missouri.

The Gators came out strong with a 4-1 lead in the first set of Saturday’s match. Florida had much to prove after losing to the Bulldogs the night before.  The first set was a close one, with Florida taking the win 26-24. Florida hit .341 in the frame, behind six kills from Thayer Hall.

Florida secured the match with a 25-23 victory in the fourth set.

The Gators improve to 67-10 against the Bulldogs all time, including a 64-2 record under Head Coach Mary Wise.  Wise commented on Georgia’s overall performance on the two-day series.

“Georgia played so well on both nights- a lot of credit goes to them on how they played and what we learned from playing a team that played as well as they did.”

This was a huge series for redshirt junior T’ara Ceasar. Ceasar became apart of the Gator Nation this year after transferring from the University of Georgia.

And she sure did shine against her former team on Saturday.

Ceasar led Florida’s offense, posting a team-high 18 kills on the evening. She finished the fall season with two double-doubles, including her 18 kills, 12 dig performance today.

Marlie Monserez continues to be an asset for this Gator volleyball team. On Saturday, she dished out 47 assists in the four sets. She finished the season with four double-doubles, including her performance tonight. Paula Cerame also posted a career-high seven assists in the match.

Four Gators tailed double-digit digs for Florida. Monserez led the way with 17, while Cerame had 15, Ceasar had 12, and Elli McKissock tallied 11.  As a team, Florida recorded eight blocks. Holly Carlton had the most for Florida with seven on the day.

The fall season is over and now Florida awaits the release of the spring slate.