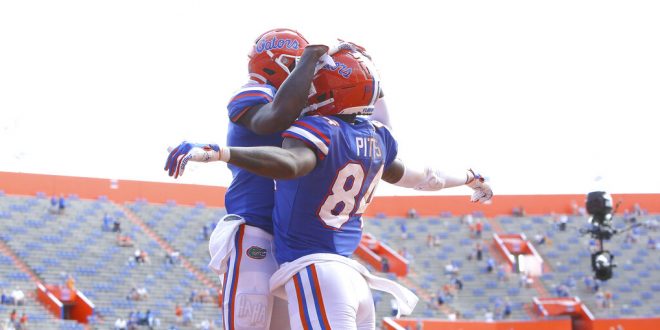 It may not have been a pretty beginning, but the Florida Gators pulled out the 34-10 win over the Kentucky Wildcats.

Florida put up 418 yards of total offense with two sacks and three interceptions and was led by the triple K’s in Kyle, Kyle and Kadarius. The Gators’ streak of 35+ point games was broken against Kentucky, but 34 points is pretty close. And while the Gator defense appeared much improved today, head coach Dan Mullen knows that there is a different key to the game.

Trask was taken out a bit early today but finished with 256 yards and three touchdowns.

Kyle Pitts is now tied for most touchdowns in the country with 11. What’s even more impressive is he’s only played in six games after missing two due to a concussion. In today’s game, Pitts ended with five receptions for 99 yards and three touchdowns and Mullen knows Pitts can be a difficult matchup for opponents.

Kadarius Toney also had quite the game, displaying his talents in multiple areas. Toney returned two punts, one being for 50 yards and a touchdown. He also had three receptions for 38 yards and one completed pass for 12 yards.

The Gators got to a slow start on defense, allowing Kentucky a nice drive and a fourth-down conversion to start the game. However, Brenton Cox Jr. came up with a huge sack for Florida, and just one play later, Mohamoud Diabate and Zachary Carter combined for another sack to put the Wildcats at third and 20.

In what seemed to be a three and out for the Gators’ first possession, a fake punt turned the possession around. Dameon Pierce ran the fake punt 15 yards for a first down. And in his first game back after suffering a concussion, Pitts came up with a huge 56-yard touchdown reception from Trask to put the Gators up 7-0. Mullen was proud of his whole team today, but especially special teams.

The Gator defense came back out energized and had two tackles for loss in Kentucky’s next possession. Florida strung together a nice few plays to take the game into the second quarter.

Well, it was a nice string of plays. That was until Justin Shorter fumbled the ball and Kentucky recovered the ball on the Gators 38 yard line. That fumble would prove costly too, as Kentucky scores on the possession to make it 7-7.

A big 21-yard pass from Trask to Toney started the Gators on their next drive. It would be just a four-play drive though after Florida turned the ball over on downs.

The Kentucky offense began to run through the Florida defense with seven of their first eight plays of the possession being rushing. The Wildcats chose to go with pass attempts to try and score though and ended the drive with just a field goal.

Nay’Quan Wright would prove his worth to the Florida offense, pulling in the next three passes for 26 yards. After a personal foul on Stone Forsythe, the Gators couldn’t make up the yardage and had to punt. However, Jacob Finn would hit a 49-yard punt that went out of bounds at the Kentucky 1-yard line.

After a solid stop by the defense, Toney showed up big for the Gators, in an otherwise bleak quarter, completing a 50-yard punt return for a touchdown to put the Gators up 14-10 to head into halftime.

Toney would pick up where he left off with a 12-yard catch to begin the third. He was given a chance to show his quarterback abilities with a 12 -yard pass to Pitts.

That set up another Kyle to Kyle touchdown to put the Gators up 21-10. Oh, and the four consecutive plays with a penalty by Kentucky helped as well. The Gator defense seemed to finally be in their zone, forcing the Wildcats to go three and out on their first possession of the second half.

Jacob Copeland also got in on the action for the Gators, with a 42-yard pass reception from Trask. Florida would settle for a field goal though after self-destructing on the Kentucky two-yard line with a sack, delay of game penalty and an almost batted down pass.

Kentucky gave the ball right back to Florida though after Diabate intercepted Terry Wilson.

Soon after, and stop me if you’ve heard this before, it was another Kyle to Kyle touchdown to put the Gators up 31-10. The next drive was another three and out for Kentucky but it wouldn’t be long before they got it back. Wright fumbled the ball and Kentucky recovered on the Florida 25 yard line.

Marco Wilson was able to stop Kentucky just short of the first down with a huge hit on Asim Rose. And after a huge 38-yard run from Pierce, Evan McPherson would come on to kick another field goal, but miss, hitting the upright.

The Gators would get another chance to score again though after Shawn Davis intercepted Wilson’s pass, giving Florida a great position at their own 45 yard-line.

And this time, McPherson made it through adding three to the Gators score. Kentucky would try Joey Gatewood at quarterback, but the result turned out the same. Tre’Vez Johnson intercepted Gatewood’s pass on the Florida 30-yard line.

And however impressive the Gators appeared, Mullen says it’s one game at a time.

The Gators will head back on the road to take on Tennessee in Knoxville next Saturday. Kickoff has not been announced yet.