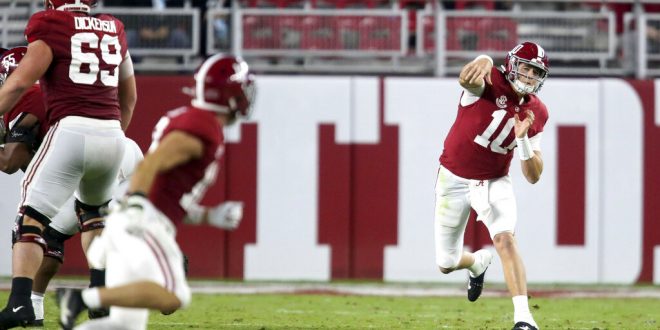 One of the premier games in the SEC West takes place on Saturday, as the No. 1 Alabama Crimson Tide matchup with the LSU Tigers in Baton Rouge, Louisiana, Saturday night.

The Tide look to avenge last season’s, 46-41, defeat to the Tigers.

Fight For Each Other

One Team. One Heartbeat. pic.twitter.com/OnviduotHT

Offense has been the storyline for the Crimson Tide (8-0) in 2020. Alabama currently sits at No. 2 in the SEC in total offense, trailing only behind the Ole Miss Rebels.

Additionally, the Tide are averaging a league-best 48.5 points per game this season.

Alabama enters this week’s matchup with LSU (3-4) fresh off an Iron bowl victory over the then 22nd-ranked Auburn Tigers. Quarterback Mac Jones continues to put up big numbers on the offensive side of the ball, as the redshirt junior tossed for 302 yards and five touchdowns in the 42-13 win last week.

Furthermore, the Crimson Tide receiving core continue to pose trouble for opposing defenses, as senior DeVonta Smith hauled in seven catches for 171 yards and two touchdowns against the Tigers.

On the defensive side of the ball, Alabama has continued to improve throughout the season. The Crimson Tide have held their last three opponents to a combined 16 points.

Head coach Nick Saban was not on the sidelines for last week’s game due to a positive COVID test in the days leading up to Alabama’s game against Auburn. He said he is feeling better and  expects to be back for Saturday’s contest with the Tigers.

Saban said the LSU game has begun to pick up steam over the last few years and that he and his team are excited for the challenge.

While the Crimson Tide come into Death Valley on a hot streak, the same can not be said, however, for the Tigers.

The defending national champions have not been able to carry the success from last season into this year. Arguably one of LSU’s biggest problems has come on the defensive side.

The Tigers rank No. 11 in the SEC in total defense, giving up over 3,000 total yards on the year so far and 30 points per game.

Last week, LSU came up on the losing end, falling to the fifth-ranked Texas A&M Aggies, 20-7. The Tigers struggled to get much going offensively, as freshman quarterback TJ Finley only managed to throw for 118 yards along with two interceptions.

Despite coming up on the short end against the Aggies, head coach Ed Orgeron and his squad are eager to face Alabama on Saturday.

One position group the Crimson Tide continue to be strong in is the offensive line. Orgeron said the group is large and athletic and has first-round NFL potential written all over it.

There is no doubt LSU will have its hands full against a talented Alabama team. But in games like this, records are usually thrown out the window.

Can the Tigers pull off the upset? We’ll find out Saturday night at 8 p.m. when the two teams hit the field.