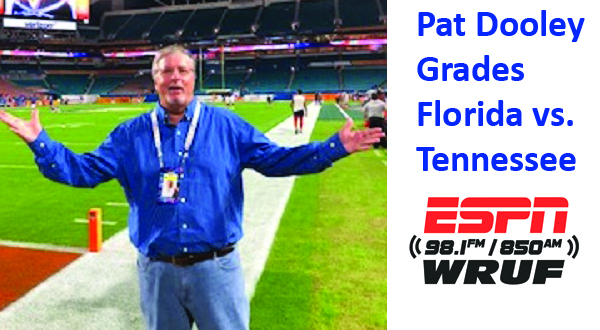 Pat Dooley of The Tailgate (weekdays 4-6 p.m. with Jeff Cardozo) brings his legendary grading of the Gators to WRUF.com. This week, Florida vs. Tennessee.

Florida could not run the ball in the first half, finishing the first 30 minutes with all of one rushing yard. To be fair, a pair of rare Kyle Trask sacks were part of the reason, but UF only attempted seven rushes in the half. Instead, Trask threw for 251 yards. One drive was killed by a penalty and the other on a missed field goal. The 80-yard drive at the end of the first half was a thing of beauty.

And then the offense went stagnant. But when it came back to life, it was pretty amazing.

These are the six consecutive plays on an 87-yard fourth quarter drive.

The Gators still finished the game with only 21 rushing yards. But 433 passing yards.

That 96-yard touchdown drive by Tennessee is the kind of thing that drives Gator fans crazy, especially with four plays of 13 yards or more plus a shaky roughing the passer penalty. But other than that, Florida limited Tennessee and freshman quarterback Harrison Bailey to 37 yards.

The defense played well for most of the second half, but after Florida took a 31-7 lead, the defense played like it was ready to go game with multiple missed tackles. Also, this – all three Tennessee touchdown drives included a roughing the passer penalty.

Florida definitely caught a break when Tennessee tried to fake a punt and the open receiver dropped the ball. Evan McPherson missed his first 50-plus field goal of the season. That was a gutsy fair catch by Kadarius Toney late in the first half.

Jacob Finn had an excellent game with one punt pinned inside the five and a 50-yarder with a fair catch.

Florida also did a good job defending one of the few teams that tried to return kickoffs. And we found out that Trask can also punt.

It’s still mindboggling how this defense can struggle to get lined up correctly at times. We are in Week 9 of action, Week 11 of the season.

Dan Mullen’s ability to come out to start the second half with a scoring drive continues to be impressive. It’s not as if the rest of the third quarter was poor playing calling, but dropped passes and poor decisions shut the Gators out the rest of the quarter.

Mullen did a good job of dealing with a defense that – for some reason – felt that stopping the run was the key. Tennessee did that and limited Florida to its fewest points this season.

Todd Grantham was able to confuse a young quarterback with its blitz package. But he’s gotta get those backups ready to play a little better.

This was the third straight less-than glamorous performance by the Gators, but it was another double-digit win. That’s where the level of expectation is with this team. We should also point out that Florida won the SEC East for the 12th time. In a season with a two-week interruption and nothing but SEC games, the 8-1 record is quite an achievement. How many times can we point out that Florida wasn’t playing Alabama Saturday evening? We know now that the Gators will in two weeks.

Previous Gators Punch Their Ticket to the SEC Championship
Next Gators Bottle Hatters in Home Opener, 86-40