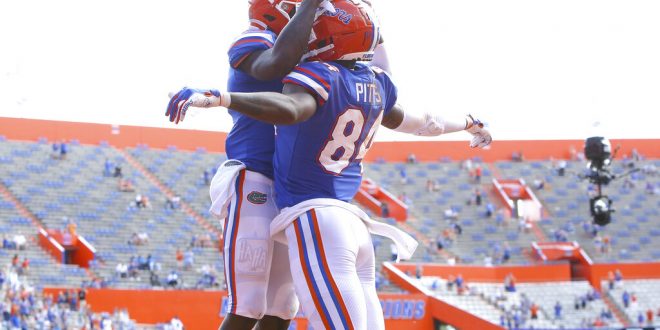 Gators Punch Their Ticket to the SEC Championship

Book your hotels. Buy your tickets. It’s been a wait of 1,463 days since Gators fans have been able to do this. With a 31-19 win over Tennessee, the Florida Gators are on their way to Atlanta to play in the SEC Championship Game.

This is the first time under Head Coach Dan Mullen that the Gators are playing in Atlanta. Don’t let that fool you though. This will not be his first time coaching in the title game. Mullen was the offensive coordinator for two Gators wins in the SEC Championship in 2006 and 2008. Those years might sound familiar to you.

In regards to this year, Mullen said he was extremely proud of his team for winning the East in what he thinks is the hardest year in conference history to do so.

Along with the big win, quarterback Kyle Trask found himself reaching another milestone.

The Game That Sealed the Deal

Florida opened scoring in Knoxville with a field goal by Evan McPherson. Tennessee rose some eyebrows in response by being the next to score, taking a 7-3 on a TD pass from Harrison Bailey to Eric Gray. This did not keep the Gators down for long.

Kyle Trask answered back two back-to-back touchdown passes to make it 17-7 at halftime. The first was to Trevon Grimes, while the second was to Kadarius Toney. Those two touchdowns got Trask to a new milestone. It put him in sole possession of second all time for touchdown passes in a single season for a Florida quarterback.

Trask kept adding on in the second half. He connected with Grimes again in the third quarter, and he found Jacob Copeland for his fourth touchdown of the game. Trask has now thrown for at least three touchdowns in every game this season, and at least four touchdown in seven games. This was also his fourth-consecutive game with no interceptions.

Grimes said he was not even surprised by Trask’s performance any more after seeing it day in and day out.

Tennessee score two more touchdowns late in the game, but it would not be enough. The Gators win their final road game of the regular season.

Trask said after the game that the Gators have accomplished their main goal, and it is a good feeling.

The Gators have a home game left next Saturday, when they play the LSU Tigers. After that, the pack their bags to take the field at Mercedes-Benz Stadium.

Harrison is a sports coordinator at ESPN 98.1 FM/850 AM WRUF. He served as a beat writer for Florida Gators football for the 2019 and 2020 seasons. He also contributes to WRUF's Gainesville Sports Center segments and makes appearances on the Clash on Harp on Sports. Harrison has been a content writer for WRUF since January 2019 as well.
@HarrisonSmaj
Previous Gators Women’s Hoops tops Cincinnati 81-58
Next Pat Dooley’s Grades: Florida vs. Tennessee