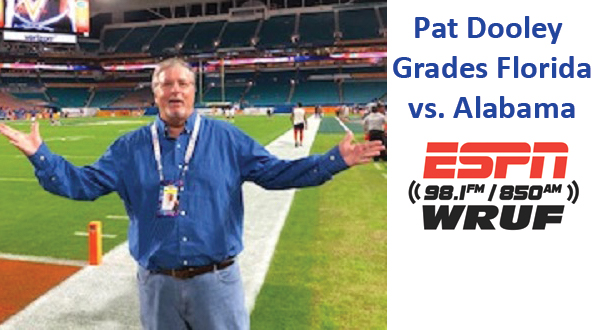 Pat Dooley of The Tailgate (weekdays 4-6 p.m. with Jeff Cardozo) brings his legendary grading of the Gators to WRUF.com. This week, Florida vs. Alabama for the SEC Championship.

Unfortunately, there wasn’t enough the offense could do in this game. The pressure was on right from the start when Alabama drove to a touchdown and never looked back in the first half. Florida only ran 25 plays in the first half thanks to its pathetic defense.

The first drive of the second half was a beauty to close the game to within 35-21.

The Gators scored 46 points and had 462 yards for the game. Kyle Trask was what we expected and both Kadarius Toney and Kyle Pitts went over 100 yards receiving. Give the offense credit for an amazing game. It just was not enough.

Everyone who worried about what Alabama’s terrific offense would do to Florida’s erratic defense had their worst dream realized. Alabama has 366 yards in the first half and the best defensive play the Gators made (Trey Dean’s pick) was negated by a fumble and a blown targeting call.  You know the Alabama coaching staff was eager to use Najee Harris as a receiver against the Florida defense and all he did was become the first Alabama running back to have three TD catches.

And then something amazing happened. Florida got two stops and the offense turned it into a game.

But even after shutting out Alabama in the third quarter you knew it couldn’t last. The last TD was a dagger, right down the field and the perfect matchup for the Tide – DeVonta Smith, who will be on my Heisman ballot, covered by Marco Wilson, who will not be. Bottom line – you are not winning many games where you give up 52 points, 605 yards and 33 first downs.

Special teams were not much of a factor although Kadarius Toney did have a couple of nice returns and Evan McPherson made a field goal after missing his last one. Jacob Finn continues to be a reliable punter, especially when it comes to pinning a team deep.

Florida had a good offensive plan. Nobody can explain the defensive plan. Again. But the inability to get off the field because of mistakes – the hands to the face, the offsides, the fumbled interception – gave Florida no hope early and the defense gave up the drive to finish it off.  Also, how do you leave DeVonta Smith open?

Look, Florida finished he season 8-3 in a year when it had to play a brutal schedule. But it was as frustrating 8-3 as we have seen around here.

I will give Florida credit for having the ball at the end of the game with a chance to win. Nobody expected that. But all anyone can think about today is that this could have been a really special team with any defense at all. Trask will be at the top of my Heisman ballot because he played an entire season knowing that the offense had to score for Florida to have a chance to win. It’s difficult to explain how this defense got so bad. But it did.