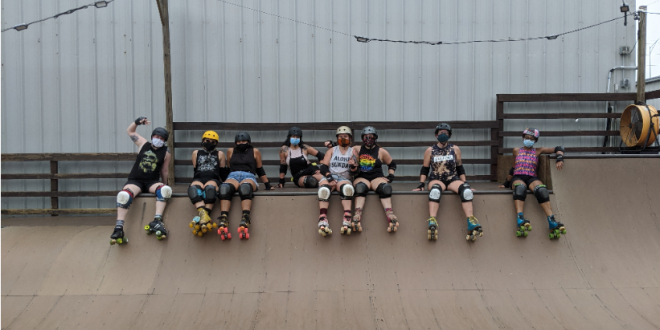 The Gainesville Roller Rebels may not have participated in any bouts this season, but they have stayed active by skating at outdoor parks while wearing masks (Chelsea Tobias).

The Swamp City Sirens clung to a hard-fought 147-138 win over the Gold Coast Derby Grrls. Gainesville’s local roller derby team saved its most heart-pounding victory of the season for its final game.

That was Oct. 5, 2019. No one could have predicted at the time that the team would not play another bout for over a year.

2020 has given the Gainesville Roller Rebels new challenges, but the women, gender expansive and gender non-conforming skaters stick together, hopeful for better days ahead.

Founded by Catherine Seeman in 2007, the Rebels joined the Women’s Flat Track Derby Association in 2013. The WFTDA sets the standards for rankings, rules and competition each year as the international governing body of women’s flat-track roller derby.

It represents more than 450 member leagues on six continents. While the Sirens are the Rebels’ B-level travel team, the All-Stars compete in WFTDA-sanctioned games for international ranking as the charter travel team.

Ordinarily, the two teams play around nine bouts a year, starting in mid-March. However, when the world shut down, so did the Rebels’ upcoming season.

League president and jammer Chelsea Tobias, 31, said that canceling an away bout in Virginia Beach in March the week the team was supposed to leave was one of the most difficult decisions it had to make.

“While it’s been understandably challenging and discouraging, I am impressed at the level of engagement we continue to have,” she said.

Tobias, known as “Queen Slayer” on the track, started derby in November 2013. She was looking for another way to get involved after moving back to Gainesville to start grad school. Once she saw the team was having a bootcamp, she went and never looked back.

“I love all of it,” she said. “But especially the community and camaraderie. I can go just about anywhere in the world and meet another derby person and know that I will have an instant connection.”

During the time off, the team still gets together virtually for weekly Zoom meetings to chat over coffee, do yoga and watch old derby bouts together.

“I really love the friendships that I’ve made through derby,” she said. “It takes a special kind of bond to spend hours hitting each other as hard as possible and still be friends at the end of the day.”

Evans, known as “Gnarly Rae Jepsen” on the track, picked up derby in September 2016 after finishing undergrad when she was looking to get some exercise as part of a group.

While they’re not allowed to fully practice together as a team and hit each other just yet, some of the Roller Rebels have found ways to stay active during their time off, such as participating in socially distanced skating at outdoor skate parks.

“It’s definitely hard to coordinate and keep in touch with everyone without practices being on our schedules though,” she said.

The long road to return to play

The official WFTDA Return-to-Play Guidelines are comprehensive and strict. The association has a seven-tier ladder system for teams to get back in action.

To qualify for Tier One status, the team must first meet the WFTDA’s “Baseline Conditions.”

These guidelines state that a team’s local government must have official regulations that remove stay-at-home orders and proximity restrictions, allow for public congregations of at least 50 people and do not prevent the team from congregating with non-contact.

The WFTDA Return-to-Play Guidelines provides a graduated system of policies and recommendations for leagues to step up from local to regional to interregional and eventually to global play. #SkateOfTheUnion pic.twitter.com/UVfCesJaKu

Each league must also monitor their county’s downward trends of new active COVID-19 cases. The WFTDA is utilizing a marker of five in 10,000 positive cases over 14 days for an ideal downward trend.

“I don’t think anyone can say when we will be able to reach those numbers with any certainty,” Tobias said. “But in Alachua County we are looking for a max of 134 cases over a 14-day period. I don’t think we’ve seen that since May or early June.”

From that point, the team can begin moving up the ladder.

“Even when we meet baseline conditions, we will have a graduated return to play,” Tobias said. “We will start with practices in small groups without contact and work our way up to slowly adding contact back with bigger groups until we are able to freely scrimmage internally within our league and eventually with other teams.”

Tier Seven, which is a return to full-scale events with spectators, is a long way off.

Giving back to the community

In the meantime, the Roller Rebels will continue doing what they pride themselves on: giving back.

“Community is one of our team’s core values,” Tobias said. “And as we are in a position to not currently have to pay for practice space, we have been looking for ways to give back to our community members.”

In May, the Roller Rebels ran a T-shirt sale that was supposed to raise money for the team. When their schedule was scrapped, they decided to continue the sale to donate the money to Computers for Kids, which equipped children with laptops as schools transitioned to remote learning.

“We have been also using our social media platforms to highlight various local charities, fundraisers and groups in need, particularly those benefitting BIPOC folks and organizations,” Tobias said.

Evans also said that the team has donated to the Human Rights Coalition of Alachua County.

Beyond their virtual meetings and charitable contribution, the team spends some time searching for a new practice space. Their previous venue, the Alachua County Fairgrounds, was sold to the Army Reserve in early October.

“While there are a number of outdoor areas we can skate around in Gainesville, it’s been challenging to find something that meets all of our needs,” Tobias said.

The team is looking for a new home that is both affordable and covered because of Gainesville’s rainy reputation.

“Any help in our search for a practice space is much appreciated,” Evans said. “If anyone has any leads, feel free to send them to info@gainesvillerollerrebels.com.”

Keeping up with the Roller Rebels

If one wants to join the team, they can join the Fresh Meat group on Facebook to learn more. No basic skating skills are required, either. Evans pointed out that everybody starts somewhere.

“It feels awesome to be pretty good at something that we all went into with zero experience,” Evans said. “It always feels really good to learn something new.”