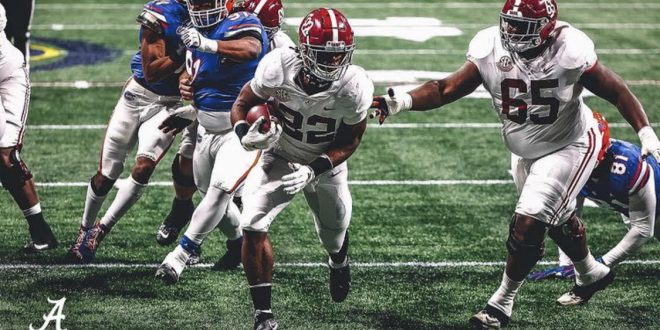 The Alabama Crimson Tide are SEC football champions after beating the Florida Gators 52 to 46 in the SEC Championship Game Saturday night in Atlanta.

Alabama had a lot of offensive heroes on the night, including running back Najee Harris who scored four first half touchdowns, one on the ground and three on passes from quarterback Mac Jones.  Add in another Roll Tide touchdown by Heisman-nominee DeVonta Smith to account for Alabama’s five first-half touchdowns.

At halftime, Alabama led Florida 35-17.  But in the third quarter, the Gators made a game of it. 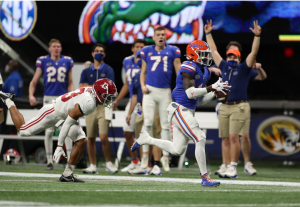 Florida not only managed to score two touchdowns, but they also kept Alabama scoreless during the frame.

The two Gator touchdowns were courtesy of Trevon Grimes, and Nay’Quan Wright.

Grimes caught a 50 yard touchdown pass from quarterback Kyle Trask and Wright scored on a three yard run and all of a sudden, the Gator trailed just 35-31 entering the fourth quarter.

Will Reichard to give the Tide a 45-31 lead with 9:53 left in the game.  Florida refused to quit however, and after being saved from a fumble by an Alabama offsides penalty, Dameon Pierce scored on a one yard run to make it a one possession game.

But a touchdown by Smith at the five minute mark of the fourth quarter put Alabama back on top again but the Gators fought back, as quarterback Kyle Trask hit tight end Kyle Pitts for a touchdown that kept Florida’s hopes alive.

This play was followed by a successful two-point conversion by Kyle Trask.

But Alabama was able to get the ball back and run down the clock to give Florida only 16 seconds to try and tie the game from deep in their own territory and Trask was sacked to end the game and give Alabama the win.

Gator coach Dan Mullen recognized his efforts in this game and the talent in Alabama’s roster.

“I thought we showed a lot of character tonight, Mullen said.  That was an excellent football team we played tonight, a lot of talented players on their team, that’s why they are ranked number one in the country, deservedly so,” said Mullen.

During this game, three Heisman candidates were on the field and maybe a fourth emerged in Harris.  Jones, Trask and Smith are all part of the Heisman conversation and their performance during an SEC Championship will certainly help their case.

Jones certainly added good points to his resume as he finished the night completing 33 out of his 43 attempts. He also ended the night with the most pass completion yards in an SEC title game with 418 yards.

His teammate, Smith, also added some pointers by breaking a record of his own as he records the most catches in an SEC Championship Game with 15.

Despite the loss, Trask broke yet another record. The senior quarterback passed Rex Grossman for the most passing yards in a single season.  Both quarterbacks threw for over 400 yards in the contest, with Jones tossing five and Trask throwing three.

But the player that possibly outshined all of them was Alabama running back and game MVP, Harris. Here is what the running back accomplished in this game.

A couple of Gators also left their mark on the field.

Florida wide receiver Kadarius Toney was the fourth receiver to record 100 yards in the first half of an SEC game and Kyle Pitts becomes the all time leader in receiving yards by a Florida tight end.

Florida is now 8-3 on the season and will await its bowl game while Alabama will be one of four teams that will play for the national championship.

Camila is a senior at the University of Florida, who served as a beat writer for the women's basketball team from 2019 until the 2021 season. She was also a beat writer for the Gators football team during the 2020 season. Camila is also WUFT's news director as well as a sports reporter/anchor.
@CamilaMaffuz
Previous Pat Dooley’s Grades: Florida vs. Alabama
Next Around the NFL: Florida Edition