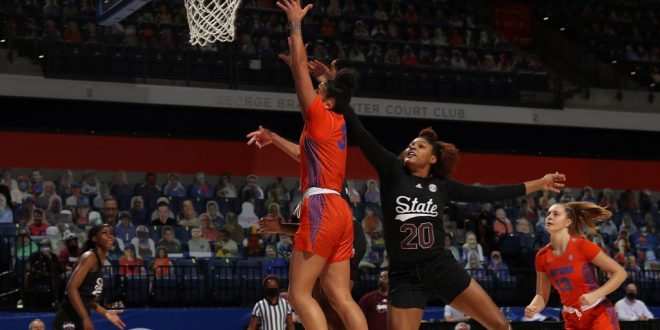 Florida Gators Women’s basketball looks to nab their eighth win of the season when they battle the Georgia Bulldogs on Sunday. Looking to avenge three consecutive losses, the Gators will have a tough road test against a stout 9-1 Bulldog team.

A Chance to Get Back on Track

Despite the three-game skid, the Gators have nothing to hang their heads on. Florida’s previous three opponents, South Carolina (five), Texas A&M (nine) and Mississippi State (14) are all ranked in the top 15.

Following Thursday’s loss to Mississippi Sate, Head Coach Cam Newbauer said, “we’re fighting, we’re competing but we’re just not as focused as we need to be.”

The losses, however, did not lack bright spots. Sophomore Guard Lavender Briggs averaged 21.3 points in the last three games, including a 23-point outing against the fifth-ranked Gamecocks. Briggs leads the Gators in scoring this season, averaging 17.9 points per game.

If the Gators want to get back in the win column, they’ll have to rely on Briggs and her keen ability to score inside.

After surrendering 92 points to the Aggies on Jan. 3rd, Newbauer made improving defensively a priority moving forward. Despite falling short to Mississippi State last week, Florida gave up just 68 points. This is still 6 more points than their season average.

One way to improve the defense is to force turnovers. The Gators’ opportunistic defense is led by Senior Guard Kiara Smith, who ranks fourth in the SEC with 23 steals this season. In addition to grabbing extra possessions for her team, Smith is also heavily involved on the offensive end. She leads the team in assists with 38, and is in scoring, averaging 15 points per game.

The Smith-Briggs backcourt duo is Florida’s most dangerous attack, and one they must rely on to end this skid.

Tip-Off is set for noon from Stageman Coliseum in Athens, Georgia.

Will Levenson is a Journalism and Sports Media major at UF. He produces daily shows for WRUF, including "Sport Scene with Steve Russell," "Harp on Sports," and "The Tailgate." In addition, Will provides weekly sports updates for WUFT News and radio Sportscenters for WRUF radio. Will has been a writer at ESPN Gainesville since September 2019.
@BigWillLevenson
Previous Reliving Hawthorne’s dual championships: Future (3/3)
Next Buccaneers win first playoff game since 2003