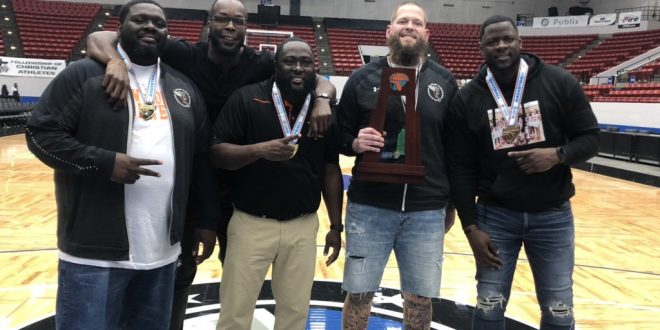 Once the dust had settled, a sense of relief came over everyone at Hawthorne.

“Unbelievable feeling,” Torey said. “I felt a weight lifted off my shoulders. The mission for this season was complete. We made history in Lakeland that night. But after we ate, the only celebration I did was sleep in my bed. Hilliard had a guy following me all night, not to mention I played almost every second of the state games. So, I was mentally and physically exhausted.”

After winning just one state championship across all sports over the school’s first 97 years of existence, those at Hawthorne understandably didn’t know how to take in winning two in a week’s time.

“It didn’t feel real,” McFadden said. “I didn’t believe we won it until like two months later, and we didn’t get our rings until like six months later. It felt like forever. You finally see all your hard work pay off, and you believe in it.”

Junior Jarrett Hughes also said that he doesn’t know how to process winning the championship, even over nine months later.

“You can’t even describe it,” Hughes said. “It’s just like wheels going in your head. It’s a once in a lifetime type of thing, and words can’t describe how you’re feeling. Coming back, it still gives you chills and everything because it still hasn’t gone through yet.”

It’s even more of a relieving feeling for Bowie, who, after coaching at Hawthorne since 2007, finally captured that elusive ring.

“It’s been 33 years since Hawthorne captured one, but for me, it was 13 long years,” Bowie said. “We’re a tradition-rich program. There’s been a lot of good teams that have come through here, but only one state championship team. We find ourselves now still going back and watching the state game and some of the games from the season. We’d never really had a chance in the moment, so we go back to relive it all. It’s something I’ll never forget.”

While also grateful to be a champion himself, Torey hopes his team’s success can inspire more success from future kids.

“Being a state champion is like being on top of the basketball world in your state,” Torey said. “Can’t nobody take it away from you. It’s something that will live on, and for the following years, kids will be told about our state run and have a run of their own.”

Other players also recognize the lasting legacy their run will hold.

“Being a state champion here is something I can hold on to for the rest of my life,” Lawrence said. “If I have kids, I can tell them what I did back in the day and bring them to the gym. They can see my face on the wall and see that I’ll always have a place at Hawthorne.”

Target on their backs

After the football team came up just short of the school’s third state title in the calendar year of 2020, both basketball teams are poised to bring another championship home.

“It’s gonna be tough though because everybody will be after our heads in basketball,” junior Thurman Mills said.

Dre Lawrence (@AgentD_4) gets it in down low to Thurman Mills (@thurmx65) who puts it in to put Hawthorne up 28-25 late in the third quarter against Hilliard.@ESPNGainesville @HawthorneHoops @HMHSHornets pic.twitter.com/LgYYq2H7Sx

Also making it tough for the boys will be the sheer amount of turnover from last year to this year.

“Only one starter returns, Dre Lawrence, and he averaged 7.8 points a game last year, so it’ll definitely be a different approach for us,” Bowie said. “But one that we embrace because this is where we started when we first started building. We always came in as an underdog. No one really thought that we’d do this or do that to start the season, but by the end of the season, we find something that works. There’ll be a lot of new faces and a lot of young guys, but we’re always up for a challenge.”

Back and better than ever?

The girls, meanwhile, only had two graduating seniors (Antania Mason and Angelina Harris), so they will continue to build off of the sisterhood that was established last year.

“Their sister bond is something they’ll never forget,” Ingram said. “I told them, ‘No matter what happens, if you’re married, if you end up with kids or whatever, when you walk back into the gym, your picture will be hanging up on the wall, and you’ll feel like you’ve been a part of something for the rest of your life no matter what you do after this.’”

As for right now, some of the girls haven’t fully grasped what being a state champion means to them yet. They have much bigger things on their mind.

“It really doesn’t feel like it,” Jackson said. “We’re state champs, yeah. That’s it. It’s like ok. People say stuff like ‘Ok! I see you, state champ!’ I’m just like ‘Yeah, we’re just gonna try to go win another one.’”

There is little doubt in the girls’ minds that they can do it all again.

“I definitely feel like we can win state again,” Hagins said. “We got three new girls, and they already caught on quick to how we play. I feel like we can go undefeated if we play hard together as a team and do what coach tells us.”

When asked if she has the same confidence that Hagins does in an undefeated season, Leiana offered a simple response.