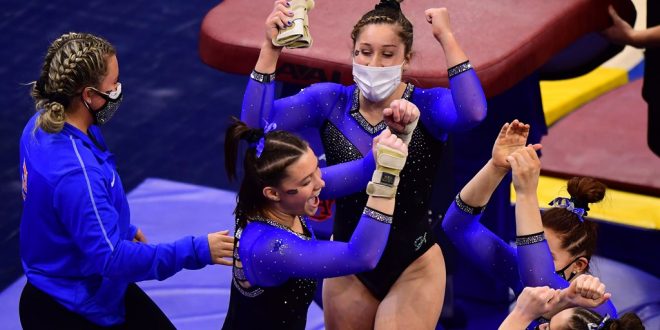 The No. 1 Gators Gymnastics team started their season off with a dominant win in Auburn against the No. 14 Tigers. Now, the Gators returned home to face their rival: the No. 7 Georgia GymDogs. Since the Gators lost their last meet against Georgia at the O’Connell Center in 2019, Florida was eager to make a statement win in their home opener. In their first top-10 matchup of the year, Florida defeated Georgia, 197.250-196.075.

The Gators started strong in their first event of the night, the vault, earning a 49.250 score. Contributing to this score, both junior Savannah Schoenherr and freshman Ellie Lazzari earned 9.825. Senior Megan Skaggs and junior Nya Reed both were rewarded scores of 9.850. With a score that would prove to win the event on the night, junior Trinity Thomas delivered with a 9.900 to finish off the vault for Florida.

“I really didn’t know what to expect in the ‘O’Dome,'” Head Coach Jenny Rowland said. “They helped bring a lot of energy to our team, and helped support them, so we couldn’t be more thankful for them showing up tonight.”

Georgia entered the meet with the third-highest bars score in the nation, and Florida had the ninth. However, Florida turned their weakness into a strength, topping Georgia’s bar score, 49.225-49.050. Thomas continued her dominance with a 9.950 score for her bars routine, a score that won the event as well. Freshman Gabrielle Gallentine also made a name for herself in her first meet in the O’Connell Center, posting a 9.825 on the bars. This proved to be her career-high, with Skaggs and Schoenherr both notching the same score as Gallentine. With junior Leah Clapper finishing the event off with a 9.800, Florida led 98.475-98.225 after the first two rotations.

“I think last weekend at Auburn, bars was a little bit off of our normal,” Clapper said. “As a team, we thought about what went well, and also what we can improve on and the mental side of staying calm, and doing what we normally do in practice. Swinging, having fun, and keeping it normal.”

Beginning the third rotation for Florida was sophomore Payton Richards, who posted a 9.875 to open the beam routines for the Gators. Junior Sydney Johnson-Scharpf added on with a 9.875 score of her own, but it was Clapper who won the event. After an uncharacteristic fall from Thomas on the beam, Clapper’s 9.925 was enough to win the event. After three rotations, the Gators still held on to their lead, 147.850-147.575.

The Gators put on a display of complete excellence in their final event of the meet: the floor routines. Clapper opened the routines with a 9.800, and they only went up from there. Johnson-Scharpf scored a 9.900, and senior Alyssa Baumann added on with a 9.925. This score tied her with her sister, Georgia’s Rachel Baumann, both scoring 9.925 on their floor routines. Reed dominated in her routine, earning a career-high 9.975 that won her the event. After the fourth rotation, Florida led 197.50-196.075 which clinched a huge win in front of Gator Nation.

“I know that it’s something more that I have to work on to get what I want which is the ten,” Reed said. “But right now, I’m really happy about that, and I can’t wait to get into practice on Sunday and work even more.”

“As soon as she finished, I had goosebumps”- Head Coach Jenny Rowland on Nya Reed’s floor performance

Florida will not have long to celebrate this victory, as they are right back in action next Friday. The team will travel to Fayetteville, Arkansas, where they will take on the No. 6 Razorbacks. In SEC Gymnastics, there is never an easy matchup.

“In the gym, we put in the numbers, and it’s just a matter of going out there and showing what we can do,” Clapper said. “I’m really excited for next weekend.”

Carson Cashion is a second-year student at the University of Florida, and has a major in journalism with a specialization in sports and media. Originally from the Orlando area, Cashion has covered the UF Gymnastics team as well as Oak Hall athletics for ESPN Gainesville.
Previous Lightning Sweep Blackhawks To Start Season
Next Gators Look to get Upset Win Over No. 6 Tennessee