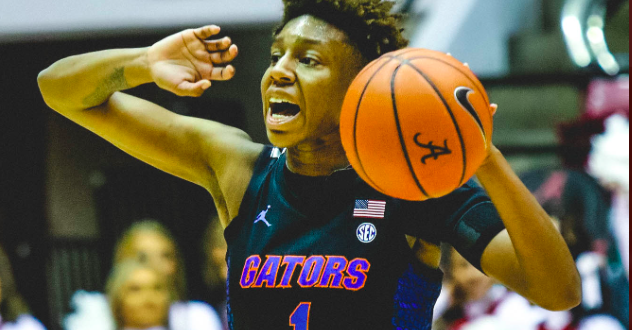 The Florida Gators women’s basketball team got their second straight conference win of the season. They defeated the Ole Miss Rebels on the road 78-68.

Ole Miss scored first and took a 4-0 lead early in the first quarter. The Gators responded with a bucket and after that, both teams struggled to score more.

The scoreboard stayed 4-2 until the five-minute mark of the first quarter. Florida then scored two buckets in a row to get their first lead of the game.

The first quarter stayed as a low-scoring frame, ending the Gators on top 13-10.

Both teams connected more on the second quarter as buckets started going in on both sides. The lead changed six times, was tied eight times, and one team would not have more than a four-point lead for most of the frame.

Ole Miss finished the first half on the lead,

Despite seeing more connected, acting head coach Kelly Rae Finley acknowledged that the first half was not good offensively.

The second half was a completely different story for the Gators. They started on an 8-0 run in which all points were made by guard Kiki Smith.

This run included a steal that led to an easy layup and two straight shots from behind the arch.

Florida kept the Rebels scoreless for the first four minutes of the third quarter.

After Ole Miss broke the scoring drought with a three from Mimi Reid, they were able to catch up to the Gators. They tied up the game with under five minutes left in the quarter.

But Florida once again went on a run and eventually got an 11-point lead over the Rebels.

They finished the third frame leading by nine.

The last 10 minutes of the game were very consistent for both teams as the scoring was very even on both sides. Florida finished the frame scoring 20 points while the Rebels scored 19.

But a consistent scoring meant that Ole Miss never got the lead back.

Halfway through the fourth quarter, Smith got tangled with a Rebels player which ended up hurting her shoulder.

She was seen on the floor holding her shoulder as her face showed the pain she was in. Her injury forced her to call it a day and stay on the bench for the rest of the game.

Before that, Smith recorded 25 points in the game, in which 16 happened after halftime. This makes it the third straight game in which Smith scores 20 points or more.

The Florida Gators will come back home as they prepare to host the Missouri Tigers. The game is scheduled for Jan. 28 and tipoff is set for 6 p.m.

As for the Rebels, they will pack up their bags as they travel to Tennessee to compete against the Lady Vols. Their game is also scheduled for the Jan. 28, and tipoff is set for 7 p.m.

Camila is a senior at the University of Florida, who served as a beat writer for the women's basketball team from 2019 until the 2021 season. She was also a beat writer for the Gators football team during the 2020 season. Camila is also WUFT's news director as well as a sports reporter/anchor.
@CamilaMaffuz
Previous Aaron Rodgers leaves his future a mystery
Next Bills Future Remains Bright Despite Loss to Chiefs in AFC Championship