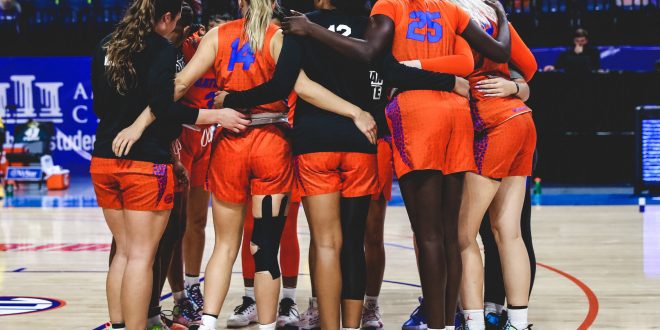 The Florida women’s basketball team hosted the Missouri Tigers Thursday in the O’Connell Center where they fought hard but lost 61-58. The Gators were on a two game winning streak in conference play, but were not able to keep that streak alive.

In this game Florida was without head coach Cameron Newbauer who was out due to health and safety protocols; it was the second straight game he missed.  Filling in for the night was assistant head coach, Kelly Rae Finley.

Florida’s leading scorer for this contest was sophomore guard Lavender Briggs with 19 points and 11 boards. Following behind her was teammate Kiki Smith with 14 points and six rebounds, but was not enough to defeat Missouri. These two have been a power duo this season.

The game was close throughout and it came right down to the wire as Florida had a chance to tie the game but as Briggs was driving to the basket she lost control of the ball and it ended up in a group of Missouri players.  It didn’t help that Florida was only 4 of 25 from three point distance and they made just 12 of 25 free throw attempts.  But Florida’s stellar defense kept them in the game until the very end.

Final from the O’Dome ⤵️

The Missouri Tigers entered the game on a two game losing streak, but taking down Florida gave them their second win in conference play putting their record at 2-4.

Two of Missouri’s players were in double-figures as Ladazhia Williams scored 16 points and grabbed eight rebounds and right behind her was Aijha Black with 14 points and 16 rebounds.

Next up For The Gators

The Gators take a road trip up to Knoxville Sunday to face 20th ranked Tennessee; tip off is set for 2 p.m.