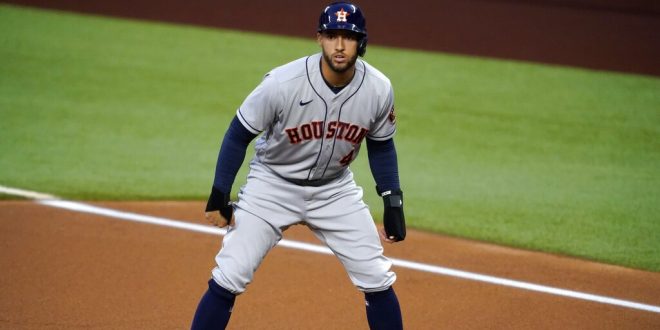 FILE - In this Sept. 25, 2020, file photo, Houston Astros' George Springer takes a lead off first during the first inning of the team's baseball game against the Texas Rangers in Arlington, Texas. Springer became the most prominent among baseball’s free agents to reach an agreement, a $150 million, six-year contract with the Toronto Blue Jays, a person familiar with the negotiations told The Associated Press. The person spoke on condition of anonymity Tuesday night, Jan. 19, 20201, because the deal was subject to a successful physical. (AP Photo/Tony Gutierrez, File)

Although the Blue Jays are known for their home grown talent, the narrative has changed with Toronto’s newest signing. George Springer, former Houston Astros outfielder, signed a six year deal worth $150 million this offseason with the Toronto Blue Jays. This is the largest contract in Toronto Blue Jays history eclipsing the previous record signing set by former outfielder Vernon Wells.

Springer helped led the Houston Astros to two World Series appearances in his time in Houston. This includes an infamous victory over the Dodgers in 2017 highlighted by the sign stealing scandal. The former All-Star and Silver Slugger award winner believes this Toronto team shares similar qualities to the Astros. Springer believes the young talent in Toronto shares some of the same fire power that the World Series winning team had. That team contained former AL MVP Jose Altuve and All-Stars Alex Bregman and Carlos Correa.

The Toronto Blue Jays look to improve on last years 32-28 record.  They fell one game short to the New York Yankees in the AL East Division and exited against their division rivals the Tampa Bay Rays. With such great talent emerging it looks like Toronto could be a dark horse for October baseball.

Ethan Sanabria is a second-year telecommunications student on the digital film and television production track at the University of Florida's College of Journalism and Communications. He has previously worked as a broadcaster for the Florida Flight basketball team and currently helps the production of WUFT news facebook lives. You can reach Ethan on any of his social media or at Ethansanabria@ufl.edu.
@ethansanabria
Previous Reaction to Tennessee hiring new head coach Josh Heupel
Next Gators Women’s Basketball Falls Short at Home to Missouri 61-58