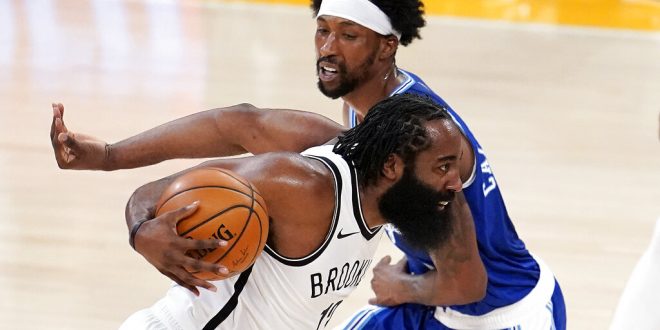 Nets Cruise Past the Lakers in a Potential Finals Preview

The Brooklyn Nets took down the Los Angeles Lakers 109-98 last night in what could be an NBA Finals preview.

The Nets played last night without Kevin Durant, and the Lakers were without Anthony Davis. Durant was sidelined with a mild hamstring injury, and Davis has been sitting because he aggravated his Achilles tendonitis.

Durant hopes to be back soon while Davis is slated to at least four weeks.

Despite the two stars missing, there was still plenty of star power in this colossal matchup.

After an early back-and-forth start, the Nets grabbed a 21-20 lead in the first quarter and never looked back. James Harden led the Nets with 23 points and 11 assists. Also, Kyrie Irving added 16 points to go with 5 assists.

The Nets built a lead as big as 25 points in the 4th quarter before taking their foot off the gas.

Overall, the Nets played one of their best games on defense Thursday night, and Irving believes they are turning the corner.

The Lakers shot just 26.7 percent from the 3-point line. Only Kyle Kuzma and Marc Gasol made more than one three on the night. Kuzma went 2/5 and Gasol was 2/4.

Both teams shot similar percentages from 2-point range, so it really seems like the game was lost for the Lakers at the 3-point line.

LeBron James and Kyle Kuzma led the way for the Lakers. James had 32 points and 7 assists while Kuzma had 16 points and 10 rebounds. However, it wasn’t enough to overcome the Lakers’ poor three-point shooting night.

Also, during the game, James reached 35,000 career points. Only two other players (Kareem Abdul-Jabbar and Karl Malone) have accomplished that feat.

Here’s James on his accomplishment:

Many people think both of these teams will end up in the Finals this summer. We still have a long way to go before then, but it’s hard to argue both teams at full strength are not the best the NBA has to offer.