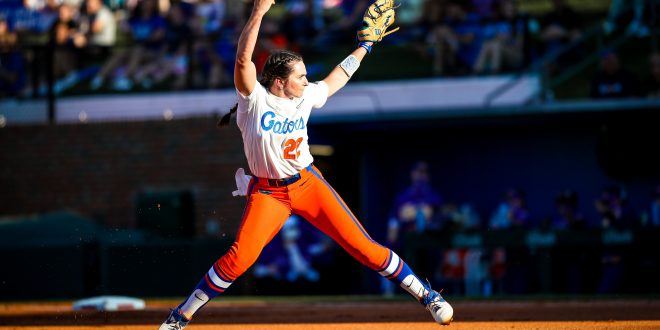 Elizabeth Hightower pitches the ball in her dominant performance against the LSU Tigers. Photo courtesy of @GatorsSB Twitter.

The fifth-ranked Gator softball team hosted the LSU Tigers in game one of a three-game series Friday night. Elizabeth Hightower shined for the Gators once again, pitching her seventh complete-game and fifth shutout on the year. Additionally, the offense came through at the right times, propelling the team to a 5-0 win over the 18-9 (4-3 SEC) Tigers.

Adams and Cottrill Come Up With Clutch Hits

Hannah Adams and Julia Cottrill combined to drive in all five Gator runs, with Adams driving in two in the third inning and Cottrill driving in three in the sixth inning.

The Gators were set down 1-2-3 in their first two chances at the plate but were able to find the scoreboard in the bottom of the third. Jaimie Hoover led off the inning with a double to left field, and Cheyenne Lindsey reached on a fielder’s choice, setting up first and third for the Gators. Stealing second on the next pitch, Adams had runners on second and third with one out, looking to break the scoreless tie.

Adams came through, ripping a single up the middle, scoring both Adams and Lindsey, putting the Gators up 2-0. Adams advanced to second on the play, showing emotion and energizing the crowd when reaching second base.

B3 | "Clutch" Adams is at it again as she scores Hoover and Lindsey on an single up the middle‼️ #GoGators pic.twitter.com/JVRInzhRsG

After two more scoreless innings from both sides, the Gators came to bat in the bottom of the sixth looking for insurance runs. Charla Echols and Kendyl Lindaman each had singles to lead off the inning, setting up Cottrill with first and second with no outs. Cottrill got her pitch, hitting a high fly ball to left field, narrowly getting over the fence and extending the Gator lead to 5-0.

“I have to give credit to coach (UF assistant) Thomas,” Cottrill said. “Coach Thomas told me they were going to throw me inside so just be ready for it and hit it over the scoreboard. I felt relaxed and went in there and trusted myself.”

Hightower Shines for Another Complete Game

Despite suffering her first loss of the season Wednesday against UCF, Elizabeth Hightower was able to rebound and have another strong performance in the circle for the Gators.

“When I was on the field tonight, Wednesday wasn’t even in my mind,” Hightower said. “It’s really good to show how we responded really well. The energy was great tonight, everyone in the dugout was getting hyped for each other, and the way we hit the ball and ran the bases I thought it was a really good bounce back.”

Hightower ran into trouble in the first inning, after walking two batters in the inning. A two-out single from the Tigers set up a play at the plate, as Hoover came up throwing home. The throw was on target, getting the LSU runner at the plate to end the inning and keep the game knotted at zero.

Hightower would give up two base runners in the top of the third, but she would battle back and strand the runners on base. She settled down after that, keeping the Tigers’ offense off balance and forcing ground balls and flyouts, allowing her to earn her 11th win of the season in the circle. Her final stat line was seven innings pitched, with only three hits allowed, with three punch outs.

Gator coach Tim Walton was pleased with the team’s performance and gave credit to the offense for getting hits in clutch situations.

“The secret to success of winning championships isn’t how high of a batting average you have,” Walton said. In most cases, the teams that are playing for championships are good softball teams, and the ability to find a way to get a hit when the opportunities are there to score runs is huge.”

The 22-3 (6-1 SEC) Gators will continue the series with the Tigers Saturday. The first pitch is set for 6 pm.