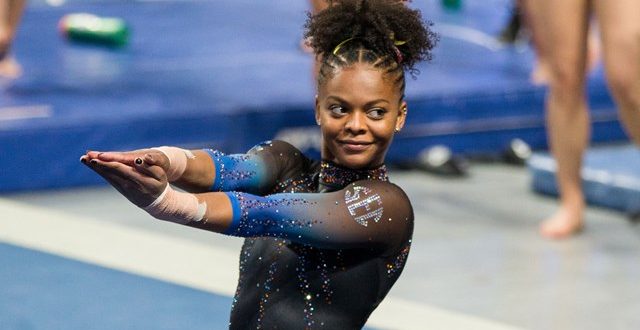 The No.1 Florida Gators Gymnastics team returned to a familiar building to begin its’ hunt for a national title: Stegeman Coliseum in Athens, Georgia. The team had found out earlier in the day two of the teams that appear in the Regional Final on April 3: Denver and Minnesota, the latter of which features senior Ona Loper, who earned a perfect 10 on the vault in the first session.

However, worrying about who the team would face off against was the last thing on its’ priority list; the team has cited worrying about other teams as a main cause for its’ disappointing third-place finish at the SEC Championship. Now, with a fresh slate of postseason, the Gators had a chance to set a commanding tone for the weekend, and to show the nation why the Gators are #1. Florida did just that; with a score of 197.950, the Gators secured a first-place finish in the Regional Semifinals and booked their ticket to the Regional Final.

Roaring Out of the Gates

Opening on the beam in its’ first rotation, Florida made a statement early. Sophomore Payton Richards returned to form, earning a 9.850 in her first performance since falling off of the beam at the SEC Championship. This was the last score below 9.900. Senior Megan Skaggs showcased her trademarked consistency, scoring a 9.900 in her home state of Georgia. Freshman Ellie Lazzari kept her momentum going, scoring a 9.950 after winning a share of the beam title in Huntsville.

“A lot of friends and family were able to come,” Skaggs said. “A few people came that haven’t even seen me perform in college, so that was really special.”

Senior Alyssa Baumann, also a beam-title winner at the SEC Championship, continued her dominance; her score of 9.975 was the highest score of the day on beam, edging out Lexy Ramler from Minnesota. Junior Leah Clapper rounded out the rotation with another 9.950, a score that would be appreciated more if not for such a stellar lineup. By the end of the rotation, the Gators had put up a score of 49.625; not only was this the leading score by four full points, it was the best score ever for Florida on the beam in regionals.

“We’ve talked about how momentum is so important, especially during the postseason when the competition is so strong,” Skaggs said. “We knew that we really needed to get the energy going and come out strong right from the start, and carry that all the way to the finish.”

After a dazzling opening rotation, Florida moved to the floor exercises. Skaggs continued her run at an all-around title for the evening with a 9.900, a season-high, and Lazzari followed her up with a 9.850. Junior Sydney Johnson-Scharpf made her sole appearance of the night and scored a 9.875. Junior Nya Reed, fresh off of being named an All-American for her floor routine, showed the fans in attendance why; her score of 9.950 tied her for the highest floor score of the second round of regionals. Baumann finished off the floor routines for the Gators; despite a solid performance, a slip at the end of her routine dropped her score to a 9.800. Nevertheless, Florida entered the second half of the meet with a strong hold on the lead.

“I’ve been working on that routine for a lot over the season,” Skaggs said. “I was really glad to come out and do it how I trained, and throw some facial expressions in there.”

Starting the third rotation on the vault, the Gators just needed to stay afloat to maintain their massive lead. Senior Jazmyn Foberg and Lazzari opened the rotation with a 9.700 and a 9.800, respectively, but Skaggs and junior Savannah Schoenherr provided the extra bump in scores. Skaggs earned her third-straight score of 9.900, and Schoenherr matched her score on the following run. Reed added on a 9.850, and Baumann finished the rotation out with a 9.825. Heading into the final rotation, Florida lost a touch of their lead due to a strong bars line-up from NC State; still, the team was ahead.

“I almost cried.”-Junior Trinity Thomas on earning a 10.0 on the bars

@Gym_Trin only had one performance tonight due to an ankle injury. She made it count. Here is the bars routine that earned her a perfect 10 for @GatorsGym @espngainesville pic.twitter.com/yPheCPySvC

The Gators finishing on the bars is only fitting; at the SEC Championship, the bars are where the team fell apart and lost their composure. Now, Florida had a chance to solidify its’ spot in the Regional Final by acing the event that has haunted it for the past two weeks. Not only that, but the team would have the help of an All-American in junior Trinity Thomas.

“I know when you’re only competing that one event, it’s possible to put a little more pressure on yourself,” Skaggs said. “So it’s really exciting to see her control that from one of your best and just to do what she does every day.”

Lazzari returned to her elite form, earning a 9.900 that Skaggs then raised to a 9.950. Schoenherr contributed a 9.875, but it was Thomas who found herself once again in the spotlight. In her only performance of the night, Thomas earned the elusive 10.000, the only one scored in the second session. Freshman Gabrielle Gallentine finished the night for Florida with a 9.950, and the Gators were ready to compete for another day.

“She [Thomas] is doing everything she can to contribute to this team,” Rowland said. “She really handled it well, took ownership and did a fantastic job.”

After finishing in first place on Friday, Florida would return to Stegeman on Saturday to compete for a spot in Nationals. NC State finished in second with a score of 196.775, so the Wolf Pack would also come to compete against Denver and Minnesota.

“Just making sure we stay hydrated, eat a good dinner and go to bed,” Thomas said. “Other than that, we’re going to be ready to go.”

Carson Cashion is a first-year student at the University of Florida, and has a major in journalism- sports and media. Originally from the Orlando area, Cashion covers the UF Gymnastics Team, having formerly covered Oak Hall Sports.
Previous No. 1 Seed Gonzaga meets No.11 UCLA in Final Four
Next Gators Drop Second Game to Ole Miss in Brutal Ninth Inning