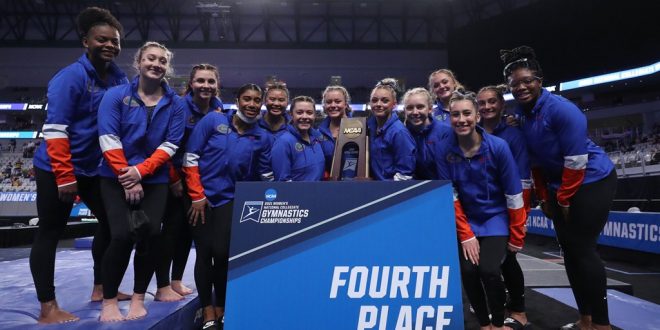 For the Florida Gators, the 2021 season did not end as planned; the team held the No.1 ranking in the nation for the entire regular season, yet failed to win either an SEC Championship or a National title. However, the possibility of seniors returning for another year of eligibility, the development of younger gymnasts and a strong incoming class make for a team in 2021 that could get over the hump.

All of the three seniors for Florida, Alyssa Baumann, Jazmyn Foberg and Megan Skaggs, have another year of eligibility. The NCAA announced that the 2021 season would not count against winter sports athletes’ years of eligibility; the idea of one or more of the Gators returning became a real possibility. The team could certainly benefit by having them back; Skaggs was as consistent as one can be this year, providing exceptional all-around scores this season regardless of the circumstances. Baumann shined on the floor and beam, and Foberg occasionally entered the vault lineup. While neither the coaches nor the athletes have made any decisions about returning public yet, Skaggs offered her thoughts on the looming decision after the National Final on April 17.

“I’ve been really focused on the current season, and I’m definitely going to need time to process tonight, and really think about what’s next for me,” Skaggs said. “I’m not ready to make any official decisions yet but I will definitely let you guys know as soon as I do.”

Florida had large contributions from plenty of underclassmen on the team in 2021; despite a forgettable postseason, sophomore Payton Richards was a solid all-around gymnast in the regular season. The freshmen on the team should see the biggest leap from year one to year two; after not having an offseason to train because of COVID, the class can have time to develop their skills and condition under the supervision of Head Coach Jenny Rowland and her staff.

Ellie Lazzari, a freshman out of Wheaton, Illinois, became one of the Gators’ best all-around performers by the end of the season. With another year of experience under her belt, fans should expect a remarkable sophomore showing from Lazzari. Gallentine, a bars specialist, posted two 9.950s at the NCAA Regional in Athens, Georgia. After falling at Nationals, Gallentine will need to use that experience to perform better in her next postseason opportunity.

“It’s going to take a lot of work,” Rowland said. “There has been a great foundation laid for this team as far as what it’s going to take and how we’re going to do it. It’s something that I know that they’re passionate about and they’re going to be ready to jump right back in and do it all over again.”

The Gators currently have a five-person freshman class for 2022. This group includes Bri Edwards, Sloane Blakely, Morgan Hurd, Riley McCusker and Leanne Wong. Hurd and McCusker will both compete for spots on the U.S. Olympic team this summer, alongside Trinity Thomas, and will bring elite-level talent to Gainesville. Wong and Blakely are also senior U.S. National Team members, and Edwards has competed at the Level Ten Championships in Florida.

With the success Lazzari and Gallentine had for the Gators this year, these five gymnasts should also be able to enter lineups from day one.

Carson Cashion is a first-year student at the University of Florida, and has a major in journalism- sports and media. Originally from the Orlando area, Cashion covers the UF Gymnastics Team, having formerly covered Oak Hall Sports.
Previous Mahomes Toe Recovery Ahead of Schedule
Next Florida Gators Baseball Takes Down Jacksonville