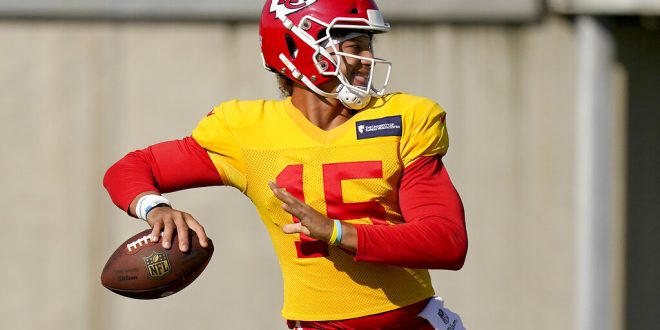 FILE - Kansas City Chiefs quarterback Patrick Mahomes throws a pass during NFL football training camp Friday, Aug. 21, 2020, in Kansas City, Mo. It has been a mere eight months since Patrick Mahomes led Kansas City from a 24-0 hole to beat Deshaun Watson and the Houston Texans in the divisional round of the playoffs, a brutally efficient comeback that ultimately propelled the Chiefs to their first Super Bowl title in 50 years. A whole lot has changed, though. (AP Photo/Charlie Riedel, File)

Patrick Mahomes, the invincible man, played the 2020 postseason dampened by a toe injury.  Throughout the playoffs, he was known to discreetly limp around the field.  Even so, when necessary, he could scramble, turn on the jets, and make something out of nothing.

Prior to Super Bowl LV, new Jets head coach Robert Saleh caught on and told Bucs defensive lineman to not be tricked by Mahomes so called, “Old Man Jog.”

Robert Saleh's advice to Bucs defensive linemen trying to chase Patrick Mahomes includes this: Don't be fooled by his "little old man jog between plays where it looks like his feet hurt" https://t.co/dXlyCMOD83

Evidently, Mahomes had a real injury that required addressing during the offseason.

During the first quarter of the 2020 AFC Divisional Round, Patrick Mahomes injured his toe early.  Eventually, during the 3rd Quarter, he had to exit the game for the likes of Chad Henne.  Mahomes did not miss any more time as he played and battled through the injury during the AFC Championship and Super Bowl.  Ultimately, doctors determined that he tore a plantar plate in his toe and needed surgery.

Dr. Robert Anderson performed the surgery on February 10th.  Years prior, he preformed a similar turf toe like procedure to assist the then injured Julio Jones.  For most players with the injury, the recovery and rehab time is a multiple months.

Recovery and Next Season

Now, approximately two months removed from the surgery, Mahomes’ recovery is ahead of schedule.

Chiefs’ QB Patrick Mahomes said he’s ‘ahead of schedule’ on his recovery from toe surgery.https://t.co/k6O28zIBKk

When talking with the media, said he thinks he is ahead of schedule but recognizes that the team does not want to rush things.  Overall, he said he is progressing and hopes to get back on the field before the end of the offseason.

Barring any setbacks, Mahomes simply needs to continue rehabbing and he will be back in no time.  The Chiefs and their quarterback are in great position to try and get back to the Super Bowl next year.

William Silverman is a sophomore at the University of Florida from Philadelphia who is interested in pursuing a career in communications and journalism.
Previous Steph Curry Continues Historic Tear
Next Gators Brings Back Firepower in 2021