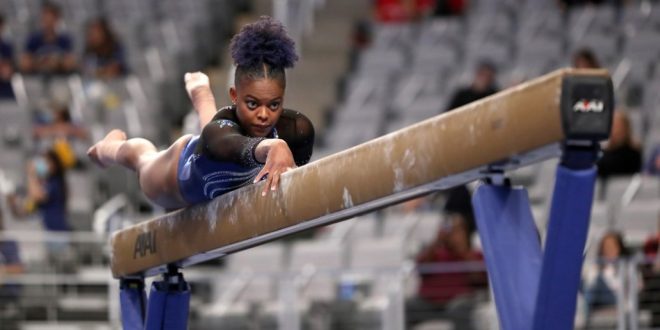 The Florida Gators have announced all year long that the goal of the team is to win a national championship. After a long, turbulent season, and a second-place finish at the National Semifinal, the day had arrived to cash in on that dream. The National Final, in Ft. Worth, Texas, would be the location where a national champion would be crowned.

Florida had three teams to compete against; Oklahoma, Utah, and Michigan; the Gators posted the lowest score in the Semifinal of the four teams that advanced, making it clear that the team would need to improve upon Fridays’ scores. In a meet that was nearly over from the opening rotation, the Gators placed fourth behind the other three opponents, totaling a score of 197.1375. The Michigan Wolverines took home the title, the first gymnastics national championship in program history.

Disaster on the Beam

“We need to execute and have a performance that we know we’re capable of on day two.”- Head Coach Jenny Rowland on what the Gators need to do to win a national championship.

Starting strong has been an issue for the Gators for the past few weeks; at the Regional Final, Florida struggled on vault in the first rotation. Yesterday, at the National Semifinal, the Gators had miscues on bars to start the meet. Those issues persisted today. Opening the first rotation on the beam, sophomore Payton Richards, who fell off of the beam yesterday, fell once again. This error once again put enormous pressure on the rest of the lineup to carry the weight of the scores. Senior Megan Skaggs posted a strong 9.8625, and freshman Ellie Lazzari delivered the first 9.9 or above of the day for Florida, earning a 9.9125.

“Payton has been a very consistent competitor,” Rowland said. “I have every ounce of confidence and never second-guessed her; her training in the gym is so consistent and never misses. It’s something that we’re definitely going to have to work on and she’s going to have to take that step and have a little bit more courage to continue to move forward.”

Senior Alyssa Baumann followed her up with a 9.9250, and it appeared as though the Gators might be able to overcome Richards’ mistake. However, junior Trinity Thomas, the star of Florida’s team that has been a stalwart performer, lost her footing on the beam. While she did not touch the floor, her stumble would count the same as a fall. Junior Leah Clapper anchored the rotation, scoring a 9.8875, but the damage was done; Florida would enter the second rotation in a deep hole.

“Today is not what the Gators know they are capable of doing,” Head Coach Jenny Rowland said. “However, what they’ve done throughout the entire season is something that cannot be taken away from them.”

Performing floor routines in the second rotation, Skaggs opened the lineup with a 9.900. Richards responded after her fall with a 9.8375; this score would not be counted. Lazzari earned a 9.8500 after Richards, and Thomas rebounded from her error on the beam with a gigantic 9.950. Senior Nya Reed matched Thomas’ score, earning yet another 9.950; these two scores from the juniors would tie for the second-highest of the day. Baumann anchored the lineup with a 9.900.

“It [the floor lineup] really meant a lot,” Rowland said. “It’s something that we have continuously spoken about all year long. Continuing to take those steps forward and not look back and hang your head down.”

Despite the great scores across the board from the Gators, they still trailed the first-place Michigan Wolverines by almost a full point; if Florida wanted a national title, it would take a miracle.

The Gators returned to the vault for the third rotation. Baumann opened the lineup with a 9.800, and Lazzari improved on that score with a 9.8250. Junior Savannah Schoenherr made her first appearance of the day, earning a 9.8625, and Skaggs matched that score. Reed provided a 9.8875 for Florida, and Thomas finished out the lineup with the highest score of the six, a 9.9250. After a fall that will likely haunt her on the beam, Thomas bounced back with two 9.900s or better. Even with Thomas’ heroics, a national championship was nearly impossible for Florida as the team entered the final rotation.

“Tonight didn’t g0 the way we wanted of course, but we have a lot to be proud of.”-Senior Megan Skaggs

Ending the meet on the bars, Richards delivered a score to build off of for next year, opening the lineup with a 9.8500. Lazzari ended her freshman season as a Gator with a 9.8875, and Skaggs scored a 9.9375 that would tie her for the highest score on bars of the day. Schoenherr fell on her routine and opted to not finish the performance after appearing to injure herself. Baumann scored a 9.8875 in what will likely be her last routine as a Gator, and Thomas rounded out the lineup with a 9.900.

“Throughout that whole routine [bars], I was just loving it, enjoying it, taking it all in,” Skaggs said. “I knew I was going to stick the landing before I landed. That was just my love for the sport, for the girls, for everything that we put into that. All that was just flowing through me when I landed.”

With all of the performances over, the Gators finished with a fourth-place result. Michigan claimed first place, winning its’ first national championship in school history; Oklahoma and Utah placed second and third, respectively. Despite not reaching the title that the team wanted, an undefeated regular season and a final four appearance make for a season that Gator Nation should still be proud of.

“There has been a great foundation laid for this team as far as what it’s going to take and how we’re going to do it,” Rowland said. “It’s something that I know that they’re passionate about and they’re going to be ready to jump right back in and do it all over again.”

Carson Cashion is a second-year student at the University of Florida, and has a major in journalism with a specialization in sports and media. Originally from the Orlando area, Cashion has covered the UF Gymnastics team as well as Oak Hall athletics for ESPN Gainesville.
Previous Gators Take Game 1 Against No. 3 Alabama in Shutout
Next Gators Swiftly Sweep Mizzou