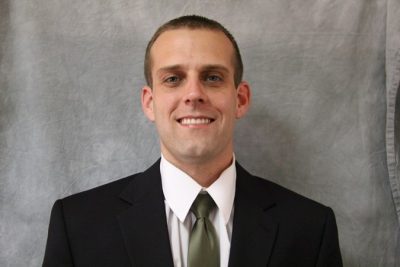 People tend to wait around aimlessly for the “right time” to do something. However, they don’t realize that time is neither right nor wrong.

The 37-year-old has been described as a go-getter his entire life — ambitious and unafraid to pursue his dreams and the unknown. That was evident in the fall of 2018 when Schreiber made the snap decision to turn in his dry erase marker and whiteboard for a cap and a whistle.

A newfound passion on the court

Schreiber had coached the men’s basketball team at Webber International University in Central Florida for eight years before moving to Fernandina Beach in North Florida to be closer to his parents.

He was out of a job until he heard about an opening for the sports director position at the local YMCA. Sports had played a major role throughout his childhood in Jacksonville. And he knew that would benefit him when applying for the spot.

One of the questions Schreiber encountered on the application asked: “What ideas do you have to bring to the table if selected for this position?”

He answered, among other things, the prospect of creating an adult basketball league to promote health and fitness for the older residents around the community. Schreiber was ultimately hired to be the sports director. And in less than a year, his idea came to fruition with the help of his coworkers.

There were some instances when Schreiber would lace up his Jordans to play. But he was mostly in charge of running the league and officiating the games he didn’t participate in.

“A couple of weeks in, one of my peers asked me, ‘Man, how long have you been refereeing?'” Schreiber said.

“I just started doing it this season so that we could have this league,” Schreiber responded. “I know all the rules, and I can still run up and down the court with anyone.”

“You’re pretty good at it,” the man declared. “Have you ever thought about taking it more seriously?”

“Not at all,” Schreiber answered. “I never thought about doing it actually.”

That interaction between Schreiber and Lucas Garcia occurred in early October, a couple of weeks shy of the Southern Association of Basketball Officials‘ deadline to become a referee for the upcoming year. Everything happened in the last minute, but Schreiber’s proactive nature helped him meet the cutoff faster than usual.

“With my dad having coached so long, he knew some of the refs, and they knew who I was,” he said. “I got in there, did all the paperwork and the training, and within weeks, I was doing some middle school games.”

The twists and turns of collegiate basketball

As a child, it seemed like Schreiber spent every waking moment playing sports. Baseball, basketball and football were his go-to ones. The older he got, however, he narrowed his preference to basketball and incorporated some long-distance running into his training.

Schreiber’s gravitation toward basketball was as inevitable as LeBron James taking the final shot of a crucial game.

Matt Schreiber, Jeremy’s father, has been a high school basketball coach for 41 years. That’s four years longer than his son has been alive.

By the time Jeremy was born in 1984, Matt was already at the helm of Hilliard Middle-Senior High School’s varsity basketball team. Jeremy played for the Flashes through his sophomore year. Before his junior season, though, he and his dad made the switch to Fernandina Beach High School.

Jeremy didn’t sign a National Letter of Intent in the months leading up to his graduation. His size, or lack thereof, hurt his chances of making it to the next level. Therefore, he decided to attend Florida State College at Jacksonville to experience what it was like to play against higher-skilled athletes.

Schreiber saw a majority of the games from the bench in his first two years at FSCJ, where he learned from the play of his teammates and spent countless hours in the film room.

He didn’t crack the 6-foot mark when he came in as a freshman, but he went through a growth spurt soon after. By the time Schreiber transferred to Georgia Southwestern State for his junior campaign, he stood at 6-foot-1, an ideal height for the prototypical point guard.

Schreiber fit in seamlessly at GSW.

Then-coach Randolph Barksdale named Schreiber a starter. On top of that, his teammates selected him as captain. Schreiber’s performances in the 2004-05 season with the Hurricanes — a team that ranked in the nation’s top 25 and earned a berth to the NAIA Division I Tournament — caught the attention of John Shoffner, the coach of Webber International University’s basketball team at the time.

Once again, Schreiber was named a starter and captain. His showings with the Warriors as a senior-led to an All-Conference Honorable Mention distinction.

After completing his Bachelor of Science in Business Administration, Schreiber chose to stay on the team as a graduate assistant. This planted the seeds for his coaching career.

Schreiber still played basketball every day despite the fact that he now donned a Warriors polo instead of a jersey. He went up against the current Webber players on the roster, teaching them everything he learned as a collegiate player.

“Honestly, I was probably in the gym more at that point than I ever was as a player because I didn’t have many classes,” he said. “So I ended up getting even better at basketball.”

His graduation from Webber with a master’s degree in 2009 marked the end of his time as a graduate assistant. But Schreiber wasn’t ready to commit to coaching just yet — he yearned for some competitive basketball.

This desire took him all the way to Jerusalem, where he played professionally for Tracenta Beit Hanina of the Palestinian Basketball Federation. Schreiber made his presence felt quicker than expected, finishing his first season with a league-high 8.4 assists per game in 2010. He also registered 32.5 points per game that year, which was good enough for the third-most.

Unfortunately, Schreiber’s life in Jerusalem was limited to two years. This is because the PBF prohibited import players from the league following the 2011 campaign.

When he returned to the United States, Shoffner offered him a full-time job as an assistant coach at Webber. Nevertheless, he still wanted to return overseas and continue playing the sport he loved.

Schreiber is a practical person, though. He is a firm believer that it’s better to be content with what you have than to risk losing everything by seeking more.

“A bird in the hand is worth two in the bush,” he claimed.

With that in mind, Schreiber launched his coaching career instead of looking for another team to play for.

“(Jeremy) has a coaching background just from watching his dad that happened naturally,” Shoffner said. “Pairing that with a lot of playing experience, I was confident that he would bring value to my staff.”

Jeremy and Matt’s relationship as strong as ever

Schreiber prefers officiating rather than coaching.

“The one thing about coaching versus officiating is that coaching requires so much time,” he said.

Schreiber tips his referee cap to coaches for balancing their overloaded plate of responsibilities. Even so, he appreciates the flexibility that comes with being a ref.

It’s been over two years since Schreiber joined the Southern Association of Basketball Officials to ref middle and high school games in counties such as Nassau, Duval and Alachua. During that span, he was introduced to a new passion by none other than his dad.

“Now that there is free time because I’m officiating, I’m able to do a lot more with property management,” he said. “I have the freedom to look for other opportunities and things to do, which is what makes reffing working for me.”

The father-son dynamic between Matt and Jeremy has been further strengthened by their enthusiasm for operating, controlling and maintaining real estate. This wouldn’t be possible if Jeremy was still coaching at Webber.

“We have a relationship that goes beyond basketball. Me and my son just looked at a building two weeks ago that we plan on investing in,” Matt said. “I’m lucky to be able to see him on a daily basis.”

Matt just announced his retirement from coaching and teaching last month. So, like his son, he has more time on his hands. The elder Schreiber has taken full advantage of this by scoping out potential properties for future business ventures.

Matt doesn’t like to waste time when he has his mind set on something. And Jeremy has picked up on that tendency throughout his life.

Nick Anderson: The Long Road to the World Series