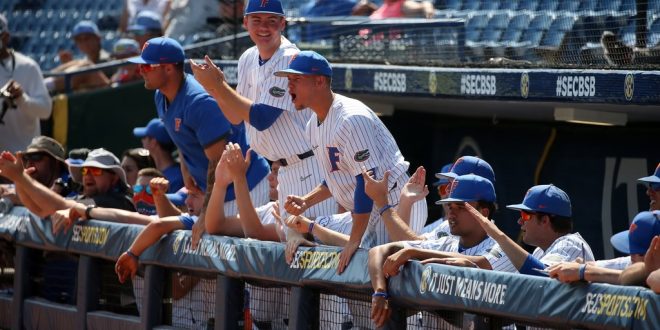 Gators Chomp Past Alabama To Advance To SEC Semifinal

The competition is starting to pick up in Hoover, Alabama. The Florida Gators put up a beating against the Crimson Tide winning 7-2. With this victory, Florida advances to the semifinal round of the SEC Tournament. From here on out, it is single elimination games.

Aleman At His Best

Franco Aleman had a reputation of shaky start. Just 1-4 on the year, Florida looked to him to guide them through Thursday’s matchup.

Through seven innings pitched, Aleman gave up just five hits and zero earned runs. On top of that, he had four strikeouts. Thursday’s debut marked the longest Aleman stayed on the hill. Additionally, it was one of his lower-hit nights as a starter.

Franco Alemán saved his best start of the season for Hoover. pic.twitter.com/ZBTOr6eXbM

The only earned runs charged to the orange and blue came late. Trey Van Der Weide relieved Aleman. Weide was perfect in one inning. Jack Leftwich was sent  to finish the Crimson Tide off in the ninth. He did, but not without giving up two runs. However, when your offense is putting up seven runs in an outing, giving up two in the last inning is menial.

What’s the one thing Florida baseball has been consistent on this season. Hot hitting.

A few drier nights at the plate, yes, but nonetheless, the Gators are alive at the plate. That was on display again in Hoover. The bats may have gotten a later start, not really coming alive until the sixth, but they were alive nonetheless. Nathan Hickey started things off with a long ball, his ninth on the year. Cory Acton, who has not seen as many days in the clay, had the most impressive evening, going 2-4 with three RBIs. He doubled down the line in the seventh, scoring Fabian and a single in the eighth driving home two more runs. Sterlin Thompson also had an RBI single in the eighth putting Florida with seven runs.

If you thought you were done playing against Alabama, you could be wrong. Florida gets a rest day Friday as all the teams that lost previously will battle it out for the remaining seeds. Florida will either take on the Crimson Tide again or Tennessee. No starter has been named for Saturday’s game, but Christian Scott is not a bad bet. Following Thursday’s win, head coach Kevin O’Sullivan said that Tommy Mace, Hunter Barco and Aleman are done for the week.