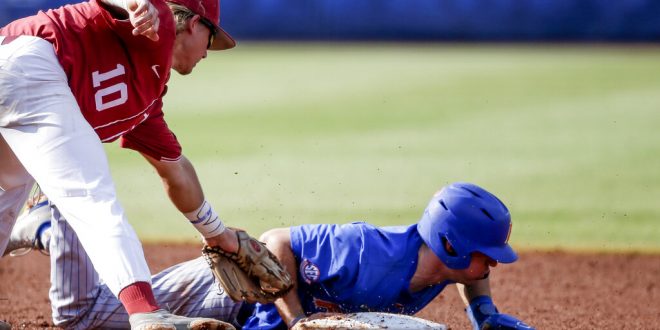 Florida outfielder Jacob Young (1) dives back to second before the tag of Alabama infielder Jim Jarvis (10) in the third inning of an NCAA college baseball game during the Southeastern Conference tournament in Hoover, Ala. Thursday, May 27, 2021. (AP Photo/Butch Dill)

The one-seed Florida Gators baseball welcomed the four-seed USF Bulls to Florida Ballpark on Friday afternoon. The Gators and Bulls went head-to-head for the opening game of the Gainesville Regional.

USF took the opener 5-3 over the Gators.

A scoreless first inning featured strong pitching from both Mace and Jasiak.

In the top of the second with two outs and a runner on base, USF’s Nelson Rivera came out swinging. After going down 0-2 in the count, Rivera rallied back to knock an RBI double down the left-field line, advancing Jake Sullivan in for the run.

USF put another run on the board in the top of the third with a solo home run from Riley Hogan. The Bulls’ hitting leader recorded his seventh home run of the season to give USF a 2-0 lead.

Hickey Puts Florida on the Board

The Gators’ Nathan Hickey put Florida on the board in the bottom of the third. An RBI double to center field brought home lead-off hitter Jacob Young.

The Gators had a chance to tie things up in the bottom of the third with a runner on first and third. Kendrick Calilao went down 0-2 early in the count but battled back to 3-2. However, Jasiak got the strikeout to keep the score 2-1, in favor of USF.

Carmine Lane put the Bulls ahead 3-1 after a solo home run in the top of the fifth.

The Bulls retired Jasiak prior to the bottom of the fifth. The right-hander finished the day with three strikeouts, four hits, and one run through four innings.

USF’s Logan Lyle took over for Jasiak with a 3-1 lead. However, his outing would be held to an inning.

A Mac Guesette double kicked off the bottom of the fifth inning. Hickey followed up with an RBI single to cut the USF lead 3-2.

Prior to the start of the sixth inning, inclement weather came through causing a two-hour rain delay.

The Bulls’ Sullivan got things rolling with a double down the left field line to kick off the sixth. Sullivan advanced to third after a passed ball from Gusette. He then put the Bulls up 4-2 after a wild pitch from Scott.

At the bottom of the sixth, pitcher Dylan Burns took the mound for USF.

Midway through the top of the seventh, Scott got into a pinch with a runner on third. Florida head coach Kevin O’Sullivan brought in reliever Trey Van Der Weide.

An RBI single from Hogan advanced Lane from third to give USF a solid 5-3 lead.

Florida would get the double play to end the top of the seventh.

The Gators’ Kris Armstrong broke the offensive silence in the bottom of the eighth with a solo home run over the right field fence. Armstrong cut the USF lead 5-3.

In the bottom of the ninth with two outs, Halter hit a double to get on base. A wild pitch advanced him to third giving the Gators a shot at scoring.

USF will face the winner of the South Alabama and Miami matchup on Saturday at 2 p.m.

Florida will face the loser of the South Alabama and Miami game on Saturday following the 2 p.m. game. The loser of this meeting will be eliminated from the tournament.