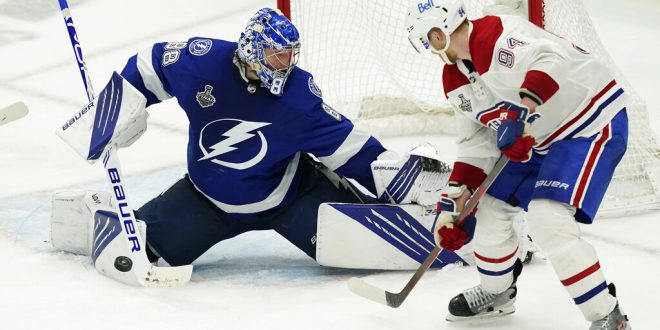 Two wins to go. For the Tampa Bay Lightning, going back to back is within reach. They took down the Montreal Canadiens 3-1 on Wednesday with a strong performance in net and some wild plays.

The first period went by without a goal, but it wasn’t exactly quiet. Montreal put 13 shot on net to Tampa Bay’s six. Bolts goalie Andrei Vasilevskiy had to be ready early and often. Staying out of the box? That’s a no go for these teams.  Physical play led to five penalties in just the first period alone.

This trend wouldn’t change throughout the whole game. The Habs outshot the Lightning in every period of play. They even won the majority of faceoffs.

Although, the Bolts fought off nearly every obstacle; including a 5-on-3 penalty kill that included a double-minor.

Obligatory pun made. Tyler Johnson passed the puck to Anthony Cirelli, who took a long wrist shot from beyond the right circle to score the first goal of the game.

Shortly after, the Lightning took a penalty that resulted in the Habs tying up the game. Nick Suzuki took a backhand shot from the blueline and hammered it past Vasilevskiy.

IT'S A PPG FOR THE CANADIENS!

It seemed like this game would go into the third period tied a goal apiece, but Lightning forward Blake Coleman had other plans. With less than a second left on the clock, he took a diving shot off a pass by Barclay Goodrow from the left side that gave the Bolts a lead they’d never relinquish. There was 0.3 seconds on the clock following the goal.

WHAT A GOAL. #GoBolts pic.twitter.com/uAvYq1EoPo

The Bolts picked up another goal in the third period and shutdown the Habs to win the game 3-1.

Vasy saved 42 of 43 shots on the night, earning him the first star of the game. Arguments for “The Big Cat” to win the Conn Smythe (Award for Playoff MVP) continue to shift in his favor.

The Bolts head to Montreal for games three and four of the series. This win could be the final game at Amalie Arena this year, as taking both games at the Bell Centre clinches the Stanley Cup.

Harrison is a sports coordinator at ESPN 98.1 FM/850 AM WRUF. He served as a beat writer for Florida Gators football for the 2019 and 2020 seasons. He also contributes to WRUF's Gainesville Sports Center segments and makes appearances on the Clash on Harp on Sports. Harrison has been a content writer for WRUF since January 2019 as well.
@HarrisonSmaj
Previous Bryan Shelton on winning the championship and what’s next
Next Name, Image and Likeness Comes to UF