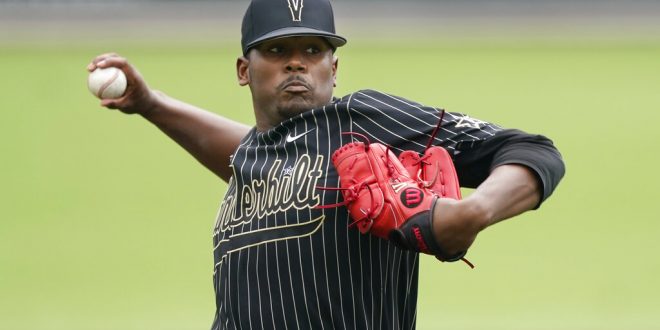 The 2021 MLB Draft starts this Sunday and will continue until July 13. Let’s take a look at this week’s top prospects and who are expected to be selected during the early rounds.

A red flag with Jud Fabian is his strikeout rate. Fabian is a polarizing guy, as this year’s strikeout rate has been alarmingly high. It is different for professionals to have high strikeout rates in the big league, like Aaron Judge, but Judge was much more consistent in college compared to Fabian. Overall, someone is going to take Fabian, and there is a good chance that he will go in the first round as he is a great outfielder.

The size and competitiveness of Kumar Rocker is the best it will get this draft class. A positive with Rocker is that he is a great pitcher, but he wasn’t consistently throwing 97-98. Rocker threw more comfortably around 92-94, with a ridiculous slider that gets more swings than misses in the strike zone than out of it. Rocker has been compared to Stephen Strasburg, but not as polished as Strasburg was in San Diego State.

Jacob Young, an OF for UF could potentially become a sleeper in this year’s draft.

Aaron Zavala, on the other hand, is one of the country’s best hitters. Zavala fits in a lot of the teams’ models, as he makes consistent hard contact and runs pretty well. Zavala could not necessarily make it in the first round, but could sneak into the comp round or the second round.

Jackson Jobe, a RHP from Oklahoma is projected to be a top 10 pick – even as high as number 3 to the Tigers. Scouts have said that Jobe might be the best pitcher in the draft class, but he’s a high schooler and doesn’t have much of a track record.

Andrew Painter, a RHP from Florida, is a good combination of size and pitching. Painter was a good pitcher, but not as eyepopping as scouts had initially thought. Painter is projected to go into the middle of the first round, with serious considerations for the comp round or second round.

Anthony Solometo, a LHP from New Jersey, is being compared to Mackenzie Gore with having a big leg kick and Madison Bumgarner. Solometo has a weird delivery when pitching, but it has worked for him.