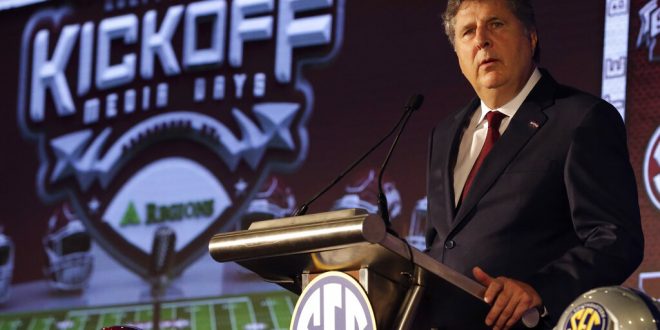 The 2021 SEC Media Days is now in the rearview for Mississippi State. Head coach Mike Leach made his first live SEC Media day appearance as he took to the podium Wednesday to speak on changes for coming this season. He was joined on the stage by linebacker Aaron Brule and wide receiver Austin Williams to talk about getting back to business.

Leach is entering his second season leading the Bulldogs. He came to Starkville in 2020 from Washington State, where he coached for seven seasons.

As he took the podium Wednesday, he discussed his success in the transfer portal throughout the offseason. Leach expanded on Southern Mississippi transfer quarterback Jack Abraham and what about the player caught his eye.

It is expected the quarterback competition for the upcoming will be between Abraham and Will Rogers. But as for now, Leach said they will wait and see what happens while the two battle it out.

When Bulldogs linebacker Brule took the stage, he discussed with the media last season’s result and where he is looking to improve next year. He said the first improvement he has noticed within the team is in the spike in energy.

“I’ve seen high energy from everybody on the team. Coach Leach is giving us great advice on what to do this offseason in order to be even better for next season. Just all of the guys being in one tune and getting going,” Brule said.

He also expanded on how exciting is it to be able to play in front of more fans and how that will impact his game in the upcoming season.

“You always want to supersede the expectations that you had the year before. Just having high energy guys, like we do have, and being in one tune and getting ready for fall camp. We’re definitely ready to get after it,” he said.

As for wide receiver Williams, he shared his expectations for this building offense heading into this season.

Looking ahead, Williams feels optimistic as more players are getting more reps and getting used to the offense.

Tori Edwards is a fourth-year Telecommunications student specializing in News with an outside concentration in Sport Management. Tori works as an author and reporter for WRUF.com and is the voice of trendings on Monday afternoons on ESPN 98.1 FM - 850 AM WRUF. You can reach Tori at victoriaedwards@ufl.edu.
@ToriEdwardsNews
Previous Vanderbilt Takes the Stage at SEC Media Days
Next Jimbo Fisher Still Questionable on Starting Quarterback