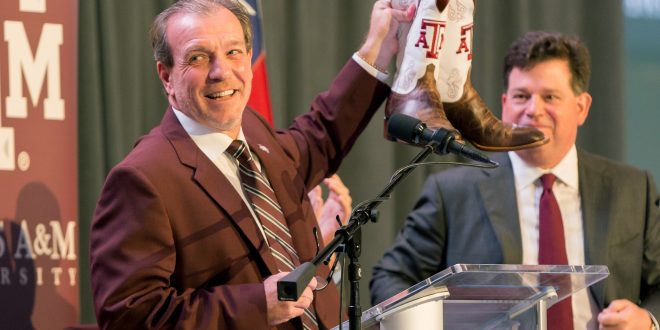 The Texas A&M head coach was the last to speak to the media Wednesday, as SEC Media Days continued in Hoover, Alabama. Fisher who is entering the fourth year coaching the Aggies told reporters that he hasn’t made the decision who will command the offense in their season opener against Kent State.

Last year, Fisher led the Aggies to a 9-1 record, ending the season with an eight-game winning streak. This was capped off with an Orange Bowl victory against 13th ranked North Carolina under four-year starting quarterback Kellen Mond. Mond, who was drafted by the Minnesota Vikings in the third round this past draft, holds the most passing yards in school history.

With the era and success of Mond’s tenure at Texas A&M, Fisher praised the talent of the two quarterbacks competing for the starting job. Freshman Haynes King and Sophomore Zach Calzada are the favorites to become the face of Aggies football who was second in rushing in the SEC, led by running back Isaiah Stewart.

Familiar Faces Back on Defense

Returning nine starters back on defense, Fishers hopes by controlling the clock and minimizing the turnovers on the offensive side of the ball, the defense play will go up with their talent and Defensive Coordinator Mike Elko calling coverages.

With the success from the last season, Fisher expects to not fly under the radar with other teams in the conference looking to battling it out trying to get out of the SEC West.

After speaking at SEC Media Days, Jimbo Fisher paused to talk about the excitement of having fans back, A&M's skill position players, the development of his QBs and more: https://t.co/uoUvCz6VBh