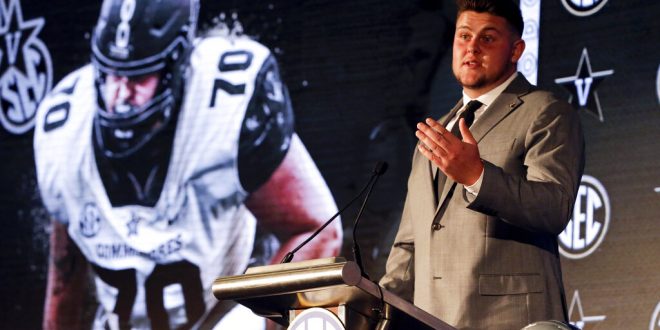 Looking to bounce back from a 0-9 season, Vanderbilt has a fresh start with Head Coach Clark Lea. At Wednesday’s SEC Media Day, he was joined by sophomore right tackle Bradley Ashmore and junior defensive tackle Daevion Davis.

The Vanderbilt alum is entering his first year as a head football coach, previously serving as defensive coordinator at Notre Dame. He spoke to the media accompanied with his helmet on the podium from his days as a Commodore. Joined by Ashmore and Davis, he praised their work ethic going into the upcoming season.

“As a new coach, you dream of guys that are willing just to take the plunge with you, guys that don’t flinch on the journey to what’s possible, guys that take your vision, hold it true, and carry it to the team, and both Bradley and Daevion have been incredible in that sense.”

He went on to talk about changing the expectations of the team.

“The first objective is to redefine what it means to be a Vanderbilt football player, and specifically, we want to assign the value of membership in this tribe internally. We want to no longer allow for external influence to shape opinions about what we do and how we do it.”

Finally, Lea reflected on how being an alum will assist him in coming back to his alma mater.

“For me, it’s seizing the opportunity we have to build something different to give this program a chance to be at its potential. I didn’t return home to have a homecoming.”

Coming off a difficult season, Ashmore is determined to get into the win column this year. Ashmore mentioned the upbeat tone of the locker room as he is looking ahead to the start of the season.

“Everyone’s got a positive outlook. Everyone’s ready. We’re determined, and we’re going into this season looking to win every time we step on the field.”

Ashmore also touched on the value of Lea coming back to Vanderbilt after his time as a player, calling it “invaluable.” To close, he emphasized the work ethic of the team and their motivation to produce results this year.

Davis only started one game last year but will take on a bigger role as defensive tackle for Vanderbilt in the 2021 season. Talking about the new culture of the football program, Davis explained the change from the start that Lea brought.

“Basically, we were stripped of logos, stripped of numbers. We had a black T-shirt coming into seven months of workouts. “That’s just what had to happen. We were told that we were restarting, we were stripping it all by our head man, Coach Lea. He wanted a new culture, a new feel for us.”

Vanderbilt will kick off their season on Sept. 4 at 7:00 p.m. home against East Tennessee State.