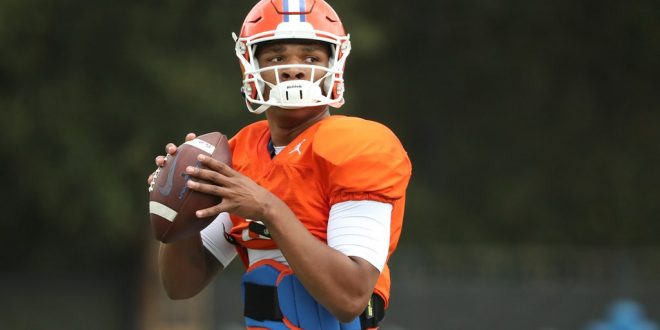 Anthony Richardson is the redshirt freshman quarterback that many are talking about. Richardson takes pride on playing with the Gators and is ready to give it all when he’s needed.

Backup to the backup

Richardson, who is originally from Miami, moved to Gainesville at the 10 years old. He is excited to play so close to home with his family nearby. He considers it a blessing to be able to play for the Gators.

“It’s a blessing not only because my family is super close and they come to games and watch just from around the corner, but it’s a blessing because I’m being a role model to the young people in the generation in Gainesville” Richardson stated.

Not only is Anthony excited to be here, but his team is excited to have him. Coach Garrick McGee talked on Richardson’s dedication and passion for the game.

“He has a strong commitment to learning the game and then the lord has blessed him with a lot of raw talent. He’s big, fast, a very smart kid and has a really quickly release and accurate with the ball. So I just think he’s an overall very good young football player.”

Richardson who is 6-foot-4, 236 pounds appeared in four games in 2020. Additionally, he went 1-2 for 27 yards and one touchdown. He had a total of 61 yards on seven carries. Also, he threw a touchdown pass against Oklahoma in the Cotton Bowl and played against Missouri where he carried the ball three times for 15 yards.

While some see Richardson competing against Emory Jones, Anthony sees it differently. He sees Emory as a big brother and a leader to him.

Richardson is ready for the season and prepared for when he is needed. He envisions his roll being just going out there and being cleanup. Whenever Emory needs a break and they need him to go out there he’ll bring the same energy. Richardson stated that after he does his thing he goes in there and just does a 1-2 punch and never lets off of the gas.