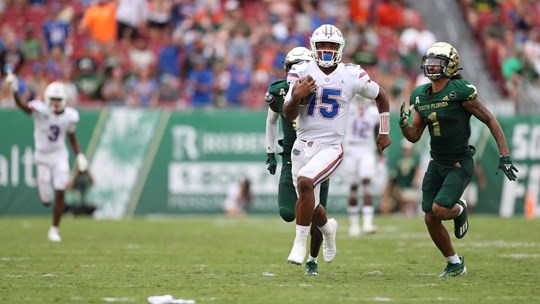 Eleven year to the date, these two state schools meet again. Gators took this one 42-20 but not without its hiccups. Let’s break it down.

First half–good. Second half–not so good. The Florida Gators steam rolled into “Champa Bay” posting 35 points in  the first half. All was well. However, everything slowed in the second half particularly the offense. Today’s matchup felt like a quarterback tryout with both Emory Jones and Anthony Richardson splitting time on the field. Here is how it went.

The first half was electric offensively. Both Jacob Copeland–who will be highlighted later–and Xzavier Henderson scored on pass from the two quarterbacks. Both Jones and Richardson played well in the first half. The second half shifted. Anthony Richardson continued to thrive, while Jones appeared to struggle. In the third quarter, Jones threw two interceptions eventually leading to the Bulls first touchdown.

While some have speculated as to which guy should get the title of starter, Mullen very clearly is standing by his players. Additionally, he emphasizes that both have areas they excel in but also could improve on.

Have a Day Jacob Copeland.

Jacob Copeland stood out in the first half. He caught a 75-yard pass from Anthony Richardson to score the second touchdown for Florida. Additionally, he caught another bullet from Richardson to make it 28-3.

Overall, Copeland scored two touchdown and amassed 115 receiving yards. The first half saw all the scoring, but the second half seemed sluggish. Everything came to a halt.

According to Dan Mullen, the second half didn’t live up to “the Gator Standard.”

The defense stopped, dropped and rolled over the USF offense. Gators didn’t allow a touchdown the whole first half. Additionally, USF averaged 4 yard per play thanks to the stonewall defense. Florida stopping the Bulls left and right. The Gators rolling right into the offensive line. Moreover, the Bulls totaled 283 yards. The defense also got to show off with an interception from Kaiir Elam.

Not only did Florida gets its second win, but Dan Mullen sports his 100th career win as a head coach.

We know what’s next even if we don’t want to say it–Alabama. The No. 1 ranked team rolls into the Swamp next week for what is sure to be a high-pressured game. Florida and their two-quarterback offense faces it’s first SEC opponent at home in just seven days.