Florida’s T’ara Ceasar was quite busy for the Gators, receiving 46 of the 108 sets Florida had in the game as she hit .283 for the match.  Amid service pressure from the Bears, Florida struggled to get players other than Ceasar and Thayer Hall involved, with no one other than the outside duo receiving over 10 sets. Florida coach Mary Wise got all 13 of her players in the match, utilizing new players in all three sets. Baylor had a wide-ranging attack from its established trio of Lauren Harrison, Yosianna Pressley and Kentucky transfer Avery Skinner.

Baylor got off to a 5-0 start, which included two kills apiece from right side Pressley and outside Harrison.  T’ara Caesar sided the Gators out. Freshman Trinity Adams entered as regular in the rotation for the first time and proceeded to go 2 point service run.

At 10-8, Ceasar had three kills, and by the end she had seven. Hall contributed three kills and Merritt Beason two. No one else had kills for Florida. The middles received two sets apiece.

The Gators had four service errors, all of which flew into the net.

Florida set up a possible turning point at 14-13 when it won a long rally with big digs after a Baylor net violation. But it wasn’t to be, as Baylor continued to average a two-point run for every point the Gators earned.

Put it DOWN ⚒️

Wise subbed Birdie Hendrickson into the game for Beason at right-side. Even with a new right-side, Ceasar received all the sets.

Florida gained a little momentum at the end of the set but couldn’t connect at the end.

Pressley exploded out of the back-right for a kill down the line. for Baylor but Florida’s Allie Monserez immediately involved the middles more, assisting Lauren Dooley for her first kill of the game. Florida got off to a 7-4 start.

Baylor contributed a few service errors. After a big Bear kill by Pressley, Wise subbed in 6’4″ freshman middle Bre Kelly. Wise played four players that didn’t play in the same position on Saturday, even if for brief periods of time.

Ceasar experimented with hitting out of the back right, and the product was two big kills.

Scoring went back-and-forth, and the Gators were able to take the lead at 15-14. Whether attack errors or overpasses, Florida failed to keep the lead. The subbing in-and-out continued. Baylor gained a 21-17 advantage and was able to sweep the final four points of the set via a service run from Skinner, to prevail 25-18.

In a change, Wise started middle Gabrielle Essix and Hendrickson. Once the score hit 5-3, Florida was never really in the game.

Ceasar continued to receive lots of sets, going 19-for-46. Hall had the second most sets, recording an 8-for-28 performance. Sofia Victoria played outside, meaning every single player got into the game for Florida.

Harrison was dominant for Baylor in the third set and concluded hitting .500. Pressley hit .296, and Skinner hit .238. Baylor went on an 11-5 run to terminate the match.

Stars of the Stats 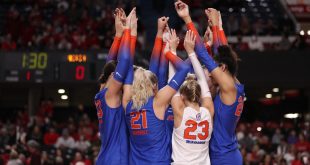 After winning back-to-back matches in the NCAA Tournament, the Gators season is over. The No. …