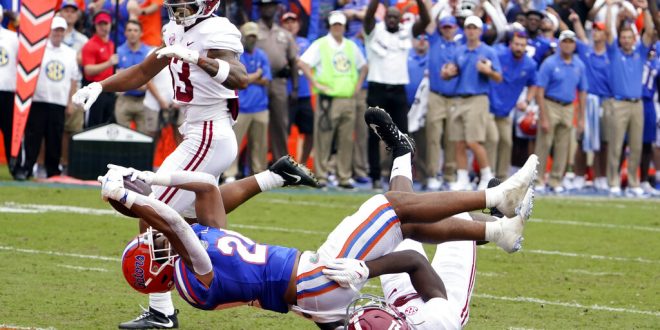 Florida running back Malik Davis, center, stretches the ball over the goal line to score a touchdown on a 26-yard run past Alabama defensive back Malachi Moore, left, and linebacker Chris Braswell, right, during the first half of an NCAA college football game, Saturday, Sept. 18, 2021, in Gainesville, Fla. (AP Photo/John Raoux)

The Alabama UF matchup saw two SEC giants battle it out in the swamp. Ultimately Alabama came out victorious over the Florida Gators.

The other three quarters

Gators defensive back Trey Dean echoed that idea for the defense going forward.

The game came down to the final couple of minutes. Alabama entered the fourth quarter with a lead of 28-23. On the first drive of the quarter, Alabama settled for a field goal to go up 31-23.

Florida got the ball with 9:30 left in the game and Emory Jones and running back Malik Davis managed the game. Ending off the drive, running back Dameon Pierce scored a clutch 17-yard touchdown run to bring the score to 31-29.

That forced the Gators to go for a two-point conversion to tie the game. The Gators failed to convert. They could not get the ball back with enough time to score again.

Alabama UF was back and forth all game and on the stat sheet.

Florida’s Nay’Quan Wright attributes a lot of the running success to Mullen and the Gators offensive line. Wright performed well on the Gators’ 99-yard touchdown drive.

Florida’s Emory Jones had 261 all-purpose yards in Saturday’s game. Dan Mullen said he saw a lot of good from Jones, even on his interception.

Over 90,000 people were at Ben Hill Griffin Stadium for the Alabama UF game. Gators defensive back Trey Dean talked about how that affected the game. He spoke about the fans forcing penalties by Alabama and giving the players an energy boost.

Jensen Young is a journalism student at the University of Florida. He works as a sports writer for WRUF.com and is the voice of trendings on Wednesday mornings on the WRUF radio station.
@Jensen_Young9
Previous Pat Dooley’s Grades: BAMA vs Florida
Next Florida Volleyball Coasts over Chanticleers