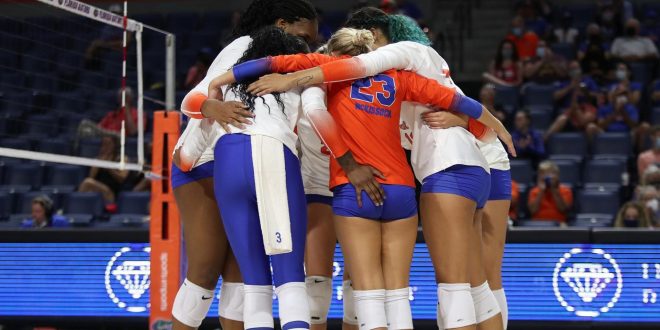 The No. 22 ranked Florida volleyball is on the road against the Georgia Bulldogs. First, let’s take a look at the matchup for tonight’s game.

The Gators have just come off a split with Mississippi State in the SEC opening series. Florida won its first game against Mississippi on Thursday, 3-2, while losing the next game on Friday, 2-3. Georgia fell to South Carolina in its SEC opener last Wednesday 2-3.

This will be the 78th meeting between the Gators and the Bulldogs as Florida topped Georgia in four sets in their last contest on November 21, 2020.  Florida has been dominant when matched up against Georgia, holding the 67-10 series advantage, including a 28-4 record in Athens.

Florida Gators In The SEC

For the conference, Florida is ranked in the Top-10 in the following categories.

The last time the Gators matched up against the Bulldogs, T’ara Ceasar led Florida on offense, posting a team-high 18 kills in the match, and Marlie Monserez dished out 47 assists in the four-setter.

The first serve is slated to start at 7 p.m. on ESPNU with Eric Frede and Katie George on the call. The match can also be heard on ESPN 98.1 FM/850 AM.