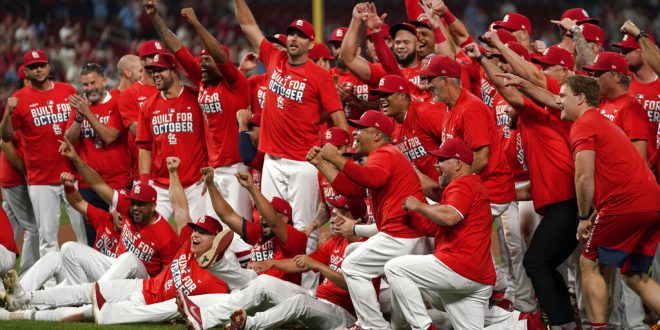 Members of the St. Louis Cardinals celebrate after defeating the Milwaukee Brewers in a baseball game to clinch a playoff spot Tuesday, Sept. 28, 2021, in St. Louis. (AP Photo/Jeff Roberson)

The MLB Playoff race is heating up as the season is winding down. One more team is now safe, though, as the St. Louis Cardinals clinch their spot in the October festivities.

The longest win streak in franchise history. That is what the 2021 Cardinals have achieved this season.

Prior to the streak, almost no one saw the Cardinals making the playoffs. Their chances of reaching the postseason were just 2.8% on Sept. 10.

Since then, a 17-game win streak and a spot in the playoffs.

Cardinals manager Mike Shildt said he is glad the work the players have put in over September has paid off.

Adam Wainwright, a Cardinals pitcher since 2005, said the key to this streak has been many players across the team showing up when a spark is needed.

Nolan Arenado is in his first year with the Cardinals after being traded from the Colorado Rockies. The eight time gold glove third baseman is happy to be making the playoffs in his first season with the team.

The rest of the NL Playoff Picture

As the Cardinals clinch their spot, there are now just two races left to determine in the National League.

The San Fransisco Giants and the Los Angeles Dodgers have both secured a playoff berth. They are, however, within two games of each other, meaning the NL West’s top spot is still up for grabs.

In the East, the Atlanta Braves currently hold the division lead by three games over the Philadelphia Phillies.

These two teams are currently in a three game series against each other that could prove to be a turning point in the division race. The Braves won the first game of the series Monday night.

In the American League, there are two teams that have already clinched a spot. The Tampa Bay Rays hold the East and the Chicago White Sox hold the Central.

The Houston Astros are the favorite to win the AL West, but the Seattle Mariners are still in reach of the divisions top spot if the Astros find a cold streak.

The Wild Card race is still up in the air. Currently, the New York Yankees hold the top spot by two games with the Boston Red Sox taking the second spot.

Following the Sox are the Mariners, the Toronto Blue Jays and the Oakland Athletics. They are 0.5 games, one game, and 3.5 games behind, respectively.

Jensen Young is a journalism student at the University of Florida. He works as a sports writer for WRUF.com and is the voice of trendings on Wednesday mornings on the WRUF radio station.
@Jensen_Young9
Previous Florida Gators Volleyball Heads To Georgia
Next Russell Westbrook discusses being a Laker