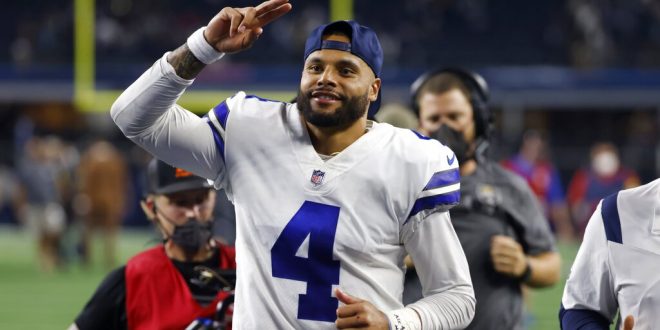 Dallas Cowboys quarterback Dak Prescott (4) acknowledges fans as he jogs off the field after their NFL football game against the Philadelphia Eagles in Arlington, Texas, Monday, Sept. 27, 2021. (AP Photo/Ron Jenkins)

Dallas Cowboys’ quarterback Dak Prescott returns to the AT&T Stadium field on Monday night. It was Prescott’s first game since his horrific ankle injury nearly 351 days later.The Cowboys walked away with a victory against the Philadelphia Eagles with a score of 41-21.

Prescott back on the field

Prior to the game, Prescott got emotional during the national anthem, overwhelmed with the feeling of being back on the home field. Dak Prescott spoke with the media saying he was happy to hear the cheers of the fans and his name being chanted. Prescott adds that he appreciates how the fans have supported him throughout his entire injury. Nonetheless, Prescott was proud to be able to go out there and give the fans a win.

Once it was game time, Prescott zoned in and put his all onto the field. Hecame back better than ever Monday night. Prescott recorded three touchdowns and four sacks against the Eagles.

The Cowboy quarterback mentions he is thankful for the time he was able to sit back and look at football from a different perspective. Additionally, he believes that with the team supporting him and the playmakers he was able to play the best he has ever played.

Dallas Cowboys’ head coach Mike McCarthy celebrated Prescott’s journey to recovery, and the amount of work he has put in. McCarthy told the media, “He’s a great leader for our football team.”

Week 3 of the NFL was huge for the Cowboys’ quarterback; Prescott’s hard work and determination brought him bak to football. Many people are thrilled with Prescott’s return and are looking forward to the rest of the NFL season.