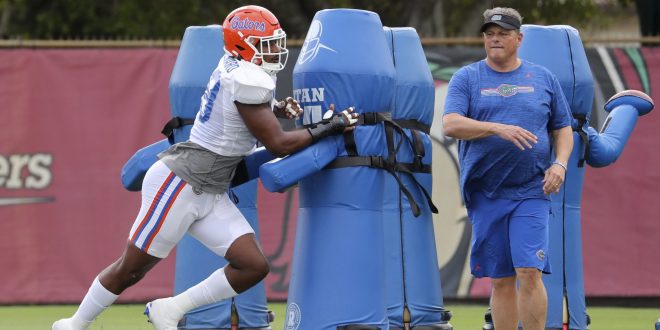 After Florida football’s shocking 40-17 loss to the South Carolina Gamecocks Saturday, the program is making a few changes to its coaching staff. Defensive coordinator Todd Grantham and offensive line coach John Hevesy have been let go per the Athletic’s Bruce Feldman and ESPN who first reported the news late Sunday.  This has been confirmed by our staff as well.

Grantham joined Florida’s coaching staff in 2018. His best season with the team was in 2019 when the Gators had one of the best pass-rushing defenses in the nation and in school history. Florida finished seventh nationally in scoring defense allowing just 15.5 points per game. The team also allowed only 23 offensive touchdowns during that season, tying for the fourth-fewest in the FBS. The Gators also averaged giving up just 304.8 yards per game, the second best in the SEC and 10th nationally. In 2020, Grantham helped the Gators rank in the top-10 in the country with sacks for the second straight season. Florida was able to take down the quarterback 35 times, tying for seventh in the nation and first in the SEC.

Grantham has been coaching for 31 years. His career began at Virginia Tech in 1990. Since then, he’s coached at Michigan State, Georgia, Louisville and Mississippi State. He’s also worked with NFL teams such as the Colts, Texans, Browns and Cowboys.

Hevesy rejoined the program in 2018 after previously working with Florida from 2005-2008. In the 2020 season, Florida’s offensive line gave former Florida quarterback Kyle Trask the ability to have the Gators lead the nation with 378.6 passing yards per game. Additionally, Florida ranked eighth and ninth nationally in yards per play (7.28) and yards per game (509.8) respectively that year. Hevesy also coached during Florida’s 2006 and 2008 Bowl Championship Series title wins.

Prior to joining the Florida football staff, Hevesy helped coach at Trinity, Brown, Syracuse, Bowling Green, Utah and Mississippi State. During his time at Mississippi State in 2017, Hevesy oversaw the third-best rushing attack in the SEC, which averaged 249.6 yards per game.

Kaitlyn Wadulack is a third-year journalism student specializing in sports and media at the University of Florida. You can reach Kaitlyn at k.wadulack@ufl.edu
Previous Dan Mullen and the Gators lose big to South Carolina
Next Oak Hall Defeats Harvest Community, 3-1 to Become Regional Champions