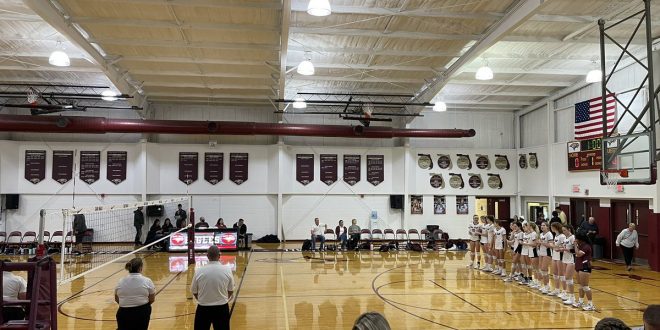 On Saturday, Oak Hall (21-8) took on Harvest Community (19-5) in the class 2A Regional Championship, defeating the Warriors 3-1. The hard-fought battle ended in a wave of happiness for the Eagles as they will now move on to the state semifinals.

The Harvest Community Warriors (19-4) are taking on The Oak Hall Eagles (20-8) in the 2A FHSAA Girls Volleyball Regional Finals.

The Battle of the First Set

The Eagles and the Warriors begin to take their positions for the first set to start. The gymnasium was loud and rumbling as fans came ready, shouting and stomping in support of their teams.

Oak Hall’s Emi Scorpio (11) comes out with a kill to give her team the first point of the game. The Eagles take a two-point lead with another kill by Sophia Aulisio (10). Harvest Community comes back in full forces to get themselves on the board.

The opponents continue to go back and forth with kills, digs and aces. Point after point, neither team is allowing themselves to fall behind.

That is until the Eagles make their way to a five point lead, 10-5. As seen at the beginning of the set, Harvest Community strikes back to eventually tie the game at 12-12. The two teams aggressively fight for a win. However, it is the Warriors who come out on top, 25-23, for the first set victory.

Going into set two, Oak Hall remains positive. The players get pumped up to face their opponents, hoping for success. Harvest Community immediately takes the lead, 3-0.

Continuing throughout the beginning of the second set, the Warriors do not allow the Eagles to surpass them in points. However, soon enough they give up a point to the Eagles through an out of bounds hit, 14-13 Eagles. Oak Hall then holds Harvest Community at 13 points, while they proceed to rack up the score board with an eight point streak, 22-13. Allowing Harvest Community to only score two more points, Oak Hall keeps the lead. The final point of the set is collected through an ace by Sophia Aulisio (10).

Oak Hall begins the third set with a continuous lead. Sophia Aulisio (10) contributes three kills in a row to bring her team 12-9, Oak Hall. Harvest Community gives up multiple points through plays resulting in out of bound. yet, gains points through a block and kill.

Cassidy McDonald (12) delivers a crisp ace into Warrior territory. This play led the way for two more aces and a seven-point lead for Oak Hall.

Amelia Chen (13) clenches the set win as she serves the ball to Harvest Community. The Warriors attempt to hit the ball back over the net, resulting in ball flying out of bounds.

The Eagles go into the fourth set confident and eager for another win to grab the regional championship title.

Harvest Community gets the first point, but then gives up the next as they serve into the net. The Warriors fall behind, while the Eagles take the lead.

Throughout the entire final set, Oak Hall maintains a lead, not allowing Harvest Community to tie or head the game.

The final two points of the entire match are scored by Oak Hall blocking Harvest Community’s attempted kills. The student section immediately storms the court, congratulating the Lady Eagles on a Regional Championship win and the ability to move onto to State Semifinals.

Oak Hall’s Coach Perry McDonald was overjoyed with the results of the match. He stated,

“I want to just enjoy tonight, because this is such a special moment. These girls came through and made it to the final four after not having a single kid on our roster to have ever won a playoff match in the post season, much less a district championship.”

When asked about what the team is looking to improve on as they move onto State Semifinals next week, Coach McDonald answered,

“You give me five days of preparation, we can sure pull some great stuff together.”

Coach McDonald also spoke on his team’s match performance and their win in the Regional Championship.

Sophia Aulisio (10) was a star player throughout the entire game. She ended the match with 25 kills and 15 digs.

Amelia Chen (13) completed the game with 7 aces and 18 service points.

The Eagles move onto the State Semifinals in Fort Meyers and will face off against Seacrest Country Day.